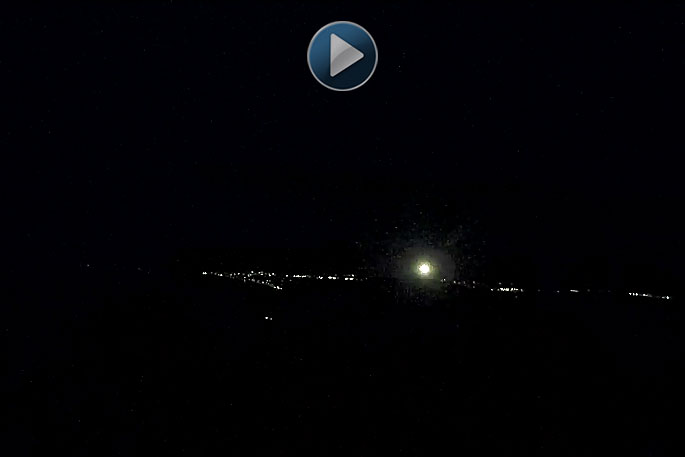 The flash/explosion heard and recorded in Whitianga. Image and video from WhitiLive/Facebook..

A loud explosion heard in Whitianga overnight is talk of the town this morning.

A resident contacted SunLive saying they heard the big bang around 10pm.

“It sounded like a massive explosion. Everyone is talking about it this morning.”

A video posted to the Whitilive.nz Facebook page shows an explosion in the night sky.

One theory is that it could be a power transformer exploding, although it appears to be high above the town for that.

Other people have taken to social media saying that it was a meteor.

There are no reports of a meteor hitting NZ overnight.

Police, fire and weather organisations have no reports of anything happening in the area that can be attributed to what may have caused the explosion.

Do you know what the bang/explosion was?

... obviously the creation of a new parallel universe which will be modelled on the town of Whitianga. The noise was caused by the echo of the Big Bang as perceived from behind it. In the new universe, which is outside our dimension, every single town in every single country of every single planet, will be considered a seaside resort and the only jobs available will be in Real Estate, Services, and Construction. Everybody else will be required to sunbathe, fish, swim, stroll around, or frequent the cafes and bars. The towns will expand until they overrun each other and this will lead to wars which will eventually destroy all the planets. The remaining fragments will coalesce to form a singularity and the final Black Hole will absorb everything until its capacity is reached and it causes another Big Bang, somewhere over Ngatea. Nature is really amazing.

this is what happens when you drink too much moonshine