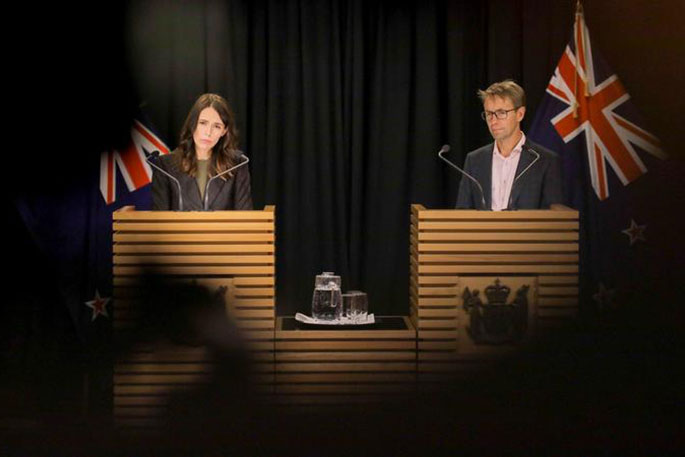 Ardern has spoken after a Cabinet meeting, along with Director-General of Health Dr Ashley Bloomfield.​​​​​​​

The first batch of vaccines has arrived in New Zealand, and the country has transitioned well to increased alert levels, Prime Minister Jacinda Ardern says.

Ardern has spoken after a Cabinet meeting, along with Director-General of Health Dr Ashley Bloomfield.

She says alert levels are unchanged, with Auckland to remain at alert level 3 and the rest of New Zealand at level 2.

The vaccine, which arrived in New Zealand about 9.30am, will be tested this week for quality assurance, once the safety check is complete doses will be formally released to start the vaccination programme, Ardern says.

It is expected border workers will start receiving vaccinations from this Saturday.

"This will be the largest full-scale vaccination campaign in this country's history," she says.

"We have purchased enough vaccines to cover all New Zealanders and to do so for free. That includes all those in New Zealand regardless of their visa status," Ardern says.

Border workers include MIQ cleaners, nurses who work at MIQ facilities, hotel workers and security staff. All border workers are expected to be vaccinated within three weeks, followed by their household contacts.

Dr Bloomfield says no further cases in the community is an encouraging sign.

"We are continuing investigations into the potential source ... the intensive domestic source investigation continues."

He says serology testing confirms they are all active cases, and investigations into the source have led the source investigation to focus heavily on the mother and daughter, as the father's test suggests he is still in the early stages of infection.

Seven of the nine co-workers of the mother have returned negative test results.

He says as at 3pm today the community testing centres have swabbed close to 2300 people in Auckland alone.

"It's very important that the right people are tested, so please don't rush to a centre if you are well or haven't been to one of the locations of interest."

He says locations of interest have been identified on the ministry's website.

Just take care Slim and Yadick. I believe it’s more than just the sniffles personally. But everyone is allowed to form their own opinion and make their own decisions. I’d prefer the border stay closed personally. No need for vulnerable people to die whatever it is. I saw that builder who got Covid on TV and he couldn’t walk up a flight of stairs anymore - after recovering! That’s not the Flu imo. Anyway take care everyone.

Yeah, I’m not that fussed either. They need to open the borders ASAP. That’ll sort the men from the boys. As long as the obese and old people get jabbed, if they are that worried, just get back to normal. It’s just a cold virus. The actual case numbers around the world are 20-50 times higher than the official figures. Antibody test studies have proved this. Just get back to normal and stop fretting.

It’s a risk either way isn’t it Yadick. I’m not really in any hurry to be the first to try them.

They can bring in as much as they want but there is no way I’m going to be one of their guinea pigs. Go hard, go early DOES NOT apply to the vaccine.