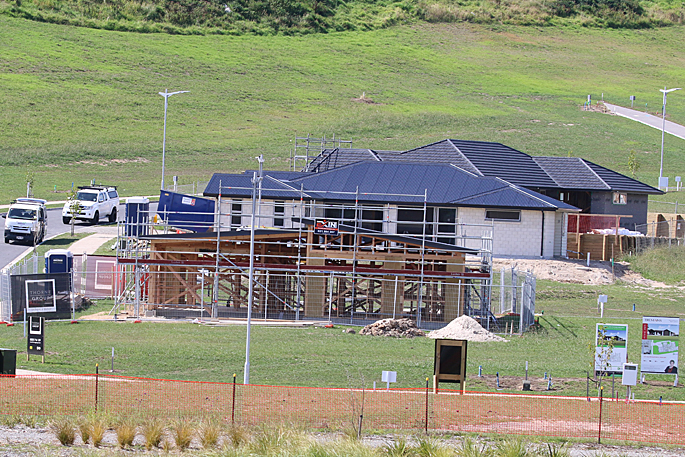 A property developer is predicting the area will run out of land to build houses on in the next two years.

A squeeze on Tauranga's housing supply is seeing people desperate to find a home coming to a rental agent in tears.

A property developer is predicting the area will run out of land to build houses on in the next two years.

Property prices and rent continue to skyrocket in the fast-growing city.

CoreLogic data shows house prices rose 14.8 per cent last year to hit an average value of $876,000, while TradeMe data reveals the median rent in the Bay of Plenty hit a new record of $535 in December 2020.

"We have some tenants come in and they've got a really sad story about trying to find a home to live," he says.

"It can be desperate if you're a tenant. They're struggling to find properties, [as] there's not a lot available."

He says TradeMe data shows there was about 170 properties available over the last month.

He says there are people from a range of demographics looking for a rental, from families to older people.

Those desperate to find a place to live were often from the Bay of Plenty, who were looking for a new house as the owners of their last home wanted to move back into the property.

"[The tenants have] done nothing wrong, it's just circumstances and they can't find anywhere [after] they've been looking for a while. Sometimes they're in the last week, in the last few days [of their tenancy] and they still have nowhere to go."

The latest New Zealand Institute of Economic Research report on Tauranga's housing situation says Tauranga will be short of nearly 1000 houses by 2022 - this gap was projected to grow to 5000 by 2025.

Property developer Classic Builders has been building about 1000 homes in Tauranga each year but co-director Peter Cooney said a land shortage would put a big spanner in the works.

He says Tauranga is due to run out of land in the next two years unless the separate issues blocking development of two major greenfield projects - Te Tumu and Tauriko West - were resolved.

Cooney says property developers had flagged a shortage of land which could be developed since the 2008 financial crisis recession.

In his view, the Resource Management Act process is slow, making it impossible to catch up with demand.

"We were short of stock in that [2008] recession. Although the recession slowed everything down, when [the demand] came back our planning wasn't far enough ahead at that stage. We're only just doing that over the last couple of years," Cooney says.

"It's been a slow process for bureaucrats to get their head around that we hadn't planned far enough ahead."

The government this week set out its plan for scrapping the Resource Management Act and replacing it with three new pieces of legislation.

Cooney welcomes the Crown-appointed commissioners taking over at the Tauranga City Council.

The council needs to spend about $50,000 on infrastructure for every new home built.

He believes successive councils had been too conservative on increasing rates to cover this, resulting in very little funding for infrastructure.

"That's having an effect on putting infrastructure in the ground, which is holding back bringing sections and land forward to provide the house supply."

Meanwhile, in the neighbouring Western Bay of Plenty district, mayor Garry Webber says building up, not out, is the way forward by intensifying in already developed areas.

"We have got a large stock of housing that was built in the 1950s and 1960s in the classic quarter acre section, [but] most of them are almost at their use-by date.

"We would be better to put 10 new apartment blocks on that, because it's close to services and all the infrastructure is there.

"That's the way we've got to start looking instead of pushing more houses out."

In addition to intensification, Webber says it's crucial that affordable homes are built for first home buyers and those on a budget.

Accessible Properties is a national community housing provider that works with the government to provide homes for more than 3000 tenants.

She says the focus needs to be on placing people in long-term housing with pathways to home ownership.

McLaren is pleased the government had flagged the Bay of Plenty as a priority area in the recent Public Housing Plan, but believed yet more houses are needed to alleviate the crisis.

...but I am a Ratepayer. I hate the thought of 7 properties unoccupied when people need housing. I lived in London for a nearly a decade and there, unoccupied houses were broken into and occupied by the homeless. (Squatting). I don’t advocate it here, and we should be able to do better than that. People should not be reduced to hopeless tears over accommodation and they should not have to part with most of their income as rent. Neither should Ratepayers have to finance the $50K for each new property. We should be improving the efficiency of governance and making developers contribute more. (They can still make fair profit...) I really hope the Commission addresses some of these issues.

I agree with earlybird and SusanB somewhat. It’s the same with business trucks and transport companies using the roads that we pay for. The argument given is. Businesses pay less taxes because they employ people. Employees. Which pay taxes. As for renting the 7 houses out. That is the problem with over-regulation. Possible they cannot legally be rented anymore and the bill is too big to do the work. So...they sit empty until they can build a nice flash property that gets trashed by new tenants. Previously...These would be first home buyers houses!

should the $50,000 needed for infrastructure per property be a cost to me? I think it’s about time the developers paid for that. They just bank their millions while the ordinary bloke has to bear the cost. It has to change.

Why are there 7 good homes in Haukore St which are to be replaced that have been empty for virtually 12 months when people desperately need accommodation. Surely they could have been rented until closer to being removed.

How much are these magnanimous "developers" contributing towards the upgrading of the city’s core services to allow them to make a profit...? Ratepayers will be funding the infrastructure upgrades required for the expansion of the city, not those that take the profits from the development. There are cheaper parts of the country in which to build "affordable" housing and it doesn’t upset me at all if the landowners of the Te Tumu block halt all construction to protect their Whenua and possible burial sites from profiteering by greedy development committees.