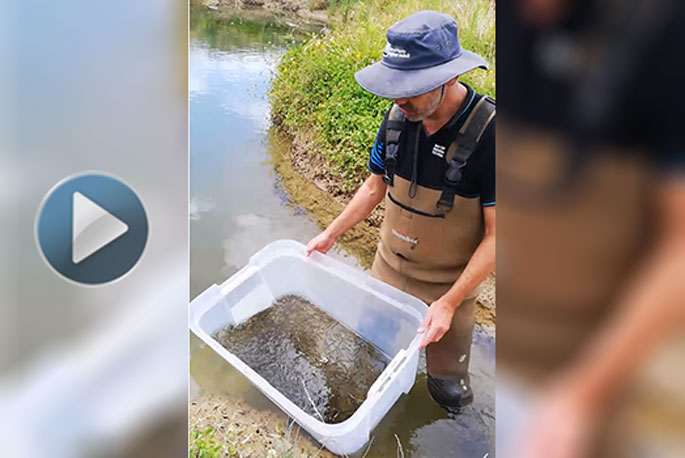 Purpose-built ponds that provide a safe haven for inanga are being hailed as a success by Bay of Plenty Regional Council Toi Moana staff, following the results of a recent overnight trapping operation.

The trapping confirmed that the newly created habitat on the banks of the Whakatane River has been very successful - inanga were found in abundance using the ponds, as were bully, shortfin and longfin eels, juvenile mullet, and triplefins.

The ponds were excavated in autumn 2020 by Toi Moana’s Rivers and Drainage team near the Ferry Road access point. The area surrounding the small, interconnected ponds was then planted with more than 3000 native plants and shallow areas were created around them to improve possible spawning areas.

They’re connected to the river by small channels to allow tidal fluctuations that regularly refresh the pond system, and have been designed to retain plenty of water, even at low tide. The ponds are located alongside a low-lying wet area that already has good wading bird habitat.

Rivers and Drainage Operations Manager Bruce Crabbe says these grassed areas within man-made stopbanks are a common sight across the Bay of Plenty.

“This work is part of our move to improve the amenity and better reflect the natural river movements and native habitats that they foster. It is great to see how well this particular spot has worked. From almost the very start we saw small inanga species in the ponds, but there are just so many more now and a wide range of other native species as well. It is a real win."

She says the results have “exceeded expectations”.

“We deployed six fyke nets and 12 gee-minnows overnight and found a very healthy population of inanga, but common bully, shortfin and longfin eels, juvenile mullet, and triplefins were using the ponds as well.

“The ponds appear to be successfully acting as a refuge and nursery for a range of fish species and this habitat value will increase further as the plants grow and establish around the ponds.

“It’s an important example of how available fish habitat can be enhanced, while maintaining flood protection. So we [the science team] will continue to monitor this site and others like it to guide future projects."

The Regional Council asks that people don’t net whitebait or fish in the ponds so the juveniles have a chance to develop into a healthy population of adults to spread and breed, strengthening our native populations.

Drone imagery of the constructed ponds on the bank of the Whakatane.