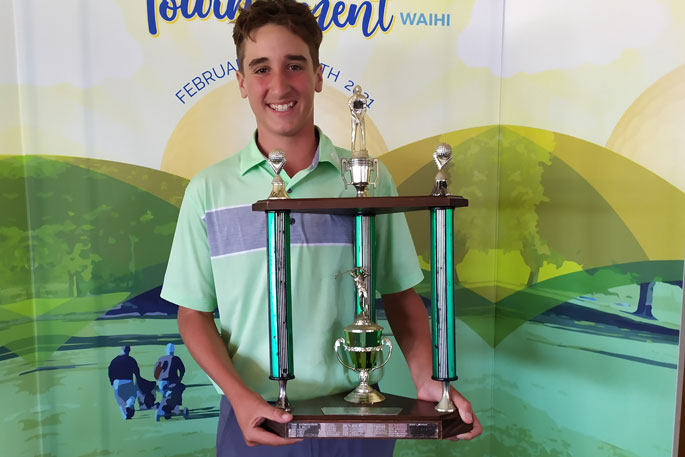 Fourteen-year-old Robby Turnbull is celebrating after scoring a hole-in-one shot in the OJI golf tournament played at Waihi.

On a +2 handicap, Turnbull had the only, and his first, hole-in-one shot at the tournament played on Saturday.

The teen played in this same 54-hole tournament in 2018, then sponsored by Expol, but was not featured on the prize list.

“However, his determination to become a professional golfer is now well on the way with his excellent display of golf throughout the tournament, winning the major prize by one shot against formidable opposition,” says tournament spokesperson Nan Hoggard.

When asked how long he has been playing golf, he replied “since I could walk”.

“His style, accuracy and maturity was the envy of many in the tournament.

“This young man is well-worth watching, and we wish him well.”

Turnbull holed-in-one on the 15th, and went on to finish the 18 holes with 69 off the stick, and subsequently to win the major tournament prize and Stafford-Bush trophy.

The 54-hole tournament was first played at Waihi in 1988, and throughout the years has gained in popularity with players returning year after year.

There is no doubt that sponsorship plays a large part in the popularity and success of an open tournament, and the generosity of all the sponsors is very much appreciated by the Club, says Nan.

“It was an early start on Saturday, February 6, for the 104 players in the field facing 36 holes playing in hot weather, with only a short lunch break after 18 holes, before continuing the rest of their journey.

“The weather was kind, with light cloud cover from time to time, and in the afternoon a pleasant north-easterly breeze gave some relief from the heat.

“The course was well-presented, dry and fast, in good condition, and as always at Waihi, not without its challenges, with some tricky pin placements on the greens.”

In the first 18 holes there was some excitement in his group when Robby Turnbull, 14 years old, holed-in-one on the 15th, and went on to finish the 18 holes with 69 off the stick, and subsequently to win the major tournament prize and Stafford-Bush trophy.

The field was divided into three divisions for the gross, nett and stableford competitions - senior men, junior men and women.

Novelty prizes were also awarded in the three divisions.

Nearest the Pin (over three rounds) Saturday AM & PM, Sunday.

Longest Drive on 7 (over three rounds) Saturday AM & PM, Sunday.