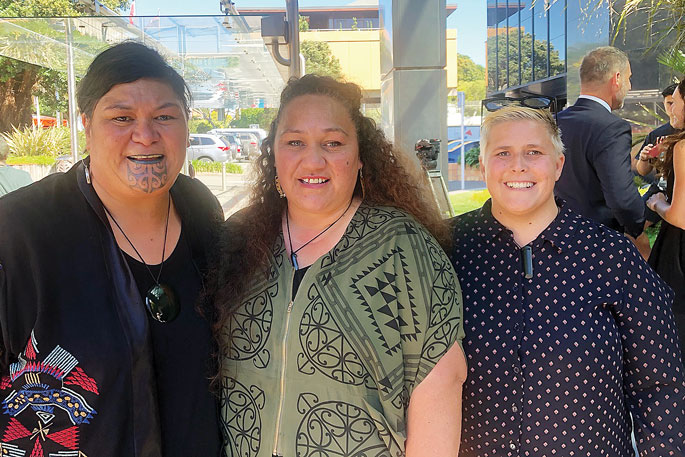 Maori ward campaigners are thrilled the Labour Government is using urgency to push through a bill to get rid of a public veto on Maori wards.

Whakatane women Toni Boynton and Danae Lee of Te Ropu Tautoko Maori were at the forefront of Whakatane’s own battle to have Maori wards instated on the district council in 2018 but lost out through a binding poll in which less than 50 percent of the voting population took part.

Maori wards are the only wards in which five percent of voters can call for a binding poll to overturn a council decision to implement them.

There are no sections within the Local Electoral Act that give voters the same rights to demand a similar poll when a decision is made to create other wards, such as rural.

Labour’s bill, which had its first reading yesterday, seeks to remove this poll provision.

If the bill passes it would mean the nine councils seeking to install Maori wards before the next elections would not be subject to a poll.

Boynton says the law change will ensure there is Maori representation on councils, which could create a legacy for future Maori leaders.

“I’m relieved for those communities that they will not have to go through what we went through.”

Following the defeat of Maori wards in Whakatane, the group set out to force a law change and presented Minister of Local Government Nanaia Mahuta with a petition late last year.

A lot of this had been driven by the community and Boynton says there has been an evolution and shift in thinking from the community since.

She says as the bill is being passed under urgency there wasn’t much time for unhappy people to make noise, however, she and the rest of the group would be doing some mahi to lessen that noise.

“It’s really, really exciting but there is still some work to be done.

“It’s time to turn to councils and iwi to have conversations and see if we can have Maori wards on the Whakatane council for the next elections. So, we are gearing up for that and looking at how the community can support us in doing so.”

Whakatane mayor Judy Turner says although she will like to see Maori wards installed on the Whakatane District Council, it's something the council will need to work through.

“We know we have some very keen activists in Whakatane who would like to see this advance and be responded to quickly so we will need to look at it this year.

“Because of the current law we thought we wouldn’t be able to look at it again until after the next election, but this is a game changer, and we are obviously keen to hear from all interested parties.”

Turner says if council was to install Maori wards before the next election it will have to resolve to do so by May.

“People are keen to get cracking, but we need to get our heads around the look and feel of what that would mean, how many seats and so on. A lot of that is a bit of an unknown at present.

“Absolutely we are expecting it to be an issue we will need to front up to and address and listen and consider what people want. But first, we need to get our heads around the legislation.”

Before Mahuta indicated the Government would be changing the law surrounding Maori wards, Opotiki District Council had resolved to include a poll at its next election asking if the community would like to see Maori wards installed.

Opotiki Mayor Lyn Riesterer says this is something she personally will still like to see happen.

“I still think that’s the right way through for us to gauge the community’s thinking around this."

Riesterer, who is Maori, says Opotiki is in a unique situation in that most of its population is Maori.

She says the council is planning to run information and education campaigns on Maori wards ahead of the election next year and thinks this should still go ahead.

“We have very even representation now, but that doesn’t necessarily mean it will stay like that. I know our council needs to have a thorough look at what Maori wards would mean for us. What it might look like; we haven’t worked that out.”

The number of times that this atrocious decision is making news in the media recently is a perfect indication of how dodgy a decision it is... Simon Bridges is probably correct in thinking that Maori candidates don’t believe in themselves and don’t believe that they have the talent or ability to go in through the front door.

Angels, the Treaty of Waitangi is not racist

Only three years then the next election, good platform for the opposition to run on, turn back the racism etc Smile while you can

If we can’t vote on local politics via a democratic referendums and have to be worked around and told what to do by a nanny state then don’t vote Labour either I have all my life but no more. Another committee talkfest is a we need for Tauranga

@waiknot. I wish mate. But politicians gotta get rich somehow.

I’m not against Maori representation in one way or the other. Maori issues need to be considered. My understanding is that Maori are already consulted before many decisions are made. Does having a Maori ward mean we no longer will need to employ costly consultants?