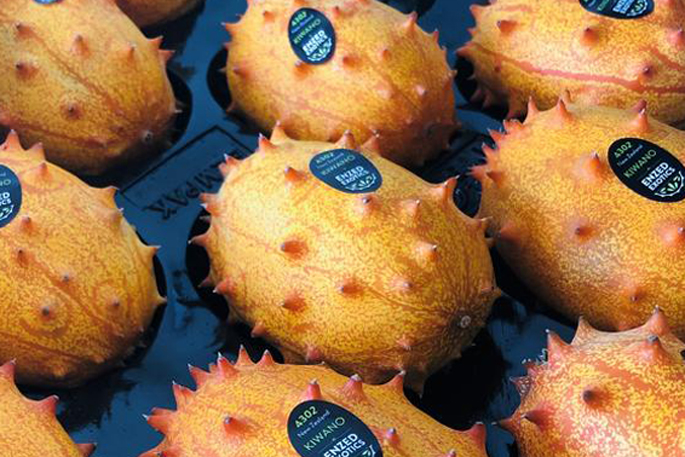 She has about 11 hectares planted with 60,000 vines this season. They normally produce about 30,000 trays or 135 tonnes of fruit, mostly for export.

"They're just so beautiful to look at - they're orange on the outside... and the inside of them is a bright, bright green, with seeds in them - sort of like a passionfruit because you eat the seeds and it's kind of like that jelly part of the centre of a cucumber, and it's kind of got a flavour of passionfruit, banana and lime.

"I like it fresh, you chop it in half and then just scoop it out and it's really delicious in salsas or in a greek salad ... anything you do with cucumbers."

Renee believes she's now the only commercial grower of kiwano fruits in New Zealand, after her company KAMMI bought out her only competition, Enzed Exotics last year, nearly doubling her production.

As well as selling in New Zealand they ship to Singapore, Japan and Hong Kong, and are working on breaking into the Indian and Taiwanese markets.

But about 80 per cent of their fruit is sent to the US, where there's been a surge in interest, which Renee speculates could be partly-fuelled by social media influencers.

"We've been doing it for 35 years and the kiwanos have always done really well, but now they've really increased a lot in the last couple of years... last year the demand was extremely high, and we've put that down to the health benefits of them.

"We've had it in magazines, you can check out the Instagrams on it, and there's just a lot on the internet, recipes and all of that... you can even check it out on TikTok, it's become very popular."

With her brother, Renee also grows kiwanos in California, and her son Isaac manages growing for both businesses. They plan to expand their operations in the next few years to keep up with demand.

"We have a year-round market by growing in New Zealand for six months and California for six months, and that's what the grocery stores really like - that it's always on their shelves, people can always come in and get it."

Renee grew up in California, with her mother running a business growing and selling kiwanos. So she's now spent 35 years growing the fruit, and said it's taken a long time to perfect her harvesting method.

"They're hugely labour intensive. They have to be replanted every year, and the picking is all done by hand and very intricate, because the kiwano is very hard to handle; its spikes are very sharp."

There are about 20 people working on this year's harvest in Te Puke, including a handful of regulars who bring their experience and speed back with them.

Renee reports 'perfect hot, dry conditions' during the growing season, and so is hopeful they're set for a bumper crop. Though she said that could change if more rain didn't reach her vines soon.