Dozens of cats uplifted from Thames 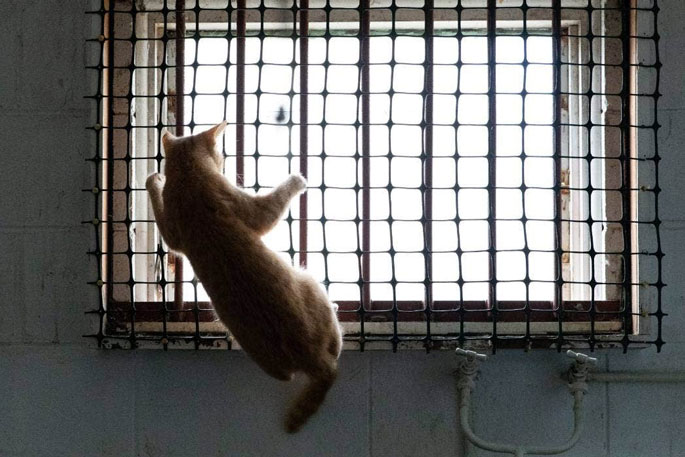 The SPCA says 48 cats were uplifted from a Coromandel building through unlawful means. Photo: Dominico Zapata.

Dozens of cats have been uplifted from a derelict building in Coromandel, after a self-styled rescuer swooped in to save them.

It's the latest twist in a saga that has included an SPCA investigation, several heated exchanges, and two animal owners living rough in their car so they could afford to house their pets.

Two weeks ago, locals in the coastal town of Thames described a “cat prison” where barren rooms were filled with meowing moggies and felines trying to escape through barred windows.

Cat owners Eve and Graeme Belmont told Stuff they had been breeding the animals for around four years, and denied they were doing anything wrong.

A fortnight later, their 48 cats were gone, uplifted by an Auckland animal welfare vigilante.

The SPCA says while the uplift is “well-meaning”, it's potentially unlawful for rescuers to take matters into their own hands.

The SPCA is the only approved charitable organisation in New Zealand able to enforce the Animal Welfare Act alongside MPI and Police.

But Charmaine Wolmarans of Pixie's Animal Welfare says she has no regrets.

“I understand that it is hard. [The couple] love their animals, and they’ve fallen on hard times, but these cats were in a horrific situation,” says Charmaine.

She says the uplifted cats have since been diagnosed with a number of health problems including underlying respiratory issues, cat flu symptoms, eye infections, bad teeth, kidney issues, mastitis, and birth deformities from inbreeding.

While her organisation has a no kill policy, she says one cat with “gaping wounds around its neck” has to be euthanised.

“I’ve been in rescue for many years and I’m quite gutsy and ballsy, but I broke down and cried when I saw these cats,” she says.

“They had been in those cages day in and day out, with not a toy, scratch pole or anything to entertain them.”

Charmaine decided to act after reading the January 24 Stuff report.

On January 29, she drove to Thames from Auckland’s North Shore and told Eve and Graeme Belmont she was prepared to take custody of the cats.

The conversation quickly became “heated”, with Eve refusing to give up “her babies”.

Graeme, however, agreed that Charmaine could take his nine ginger cats. 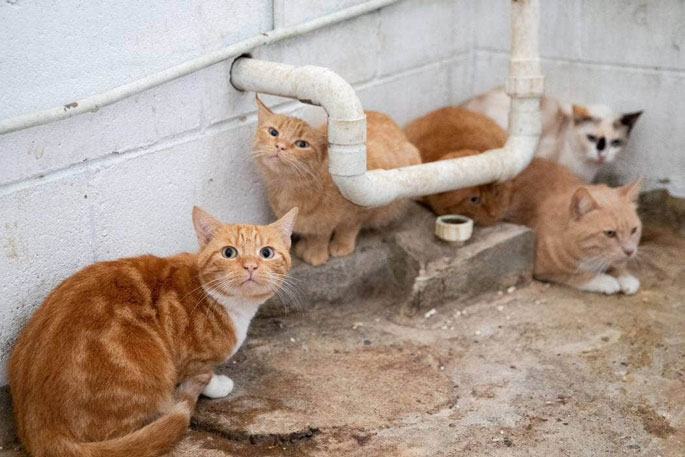 Graeme’s ginger cats were the first to be taken back to the Pixie Animal Welfare sanctuary. Photo: Dominico Zapata.

The next day, Charmaine went knocking again. This time, she had written up a contract to give her custody of the animals.

Worried his cats might be euthanised by the SPCA, Graeme says he signed the contract with the understanding it was a temporary agreement.

“As soon as we find somewhere else we will be getting the cats back,” he says.

Once the contract was signed, Charmaine proceeded to uplift the cats.

Photographs showed police officers at the scene at the time of the incident.

Charmaine says she has since spent more than $4000 on vet bills for the cats, and expects that figure to double.

Eve Belmont continues to deny the cats had been mistreated, and says she believes the uplift is "theft”.

“Graeme had no right to sign that contract, because they're my cats,” Eve says.

“We were working with the SPCA, and they were helping us and paying some of our vet bills.”

She is sad to hear one of the animals had been euthanised, and says she didn’t give Charmaine permission to kill her cat.

The SPCA says it did not condone animal welfare activists taking matters into their own hands.

“SPCA investigations can be hampered by the actions of well-meaning members of the public or organisations when animals are removed from properties unlawfully or where relevant information is not passed on to our inspectors,” the SPCA says in a statement.

SPCA inspectorate general manager Alan Wilson says the organisation had to act within the limits of the law, and that was not always well understood.

He says the SPCA often had to address "complex” issues involving multiple agencies to provide help not just for animals but also for their owners.

Alan says SPCA inspectors are always willing to work with external rescuers, but cautions that unlawful actions by activists could hinder prosecutions.

So many wrong actions here...

... it is very hard to clearly decide what is right. It seems that , despite good intentions, the cats were in a pretty bad state so the end result is probably for the best.

I too do not condone illegal activities however in this case they have a contract signed by both parties. YOU have a duty of care, how long were these animals to suffer the cruelty of this lockup while politics and red tape was being toyed back and forth? While YOU were meaning well it would appear these cats and kittens were left to suffer so this time I believe you were taking far too long and the right thing has been done.