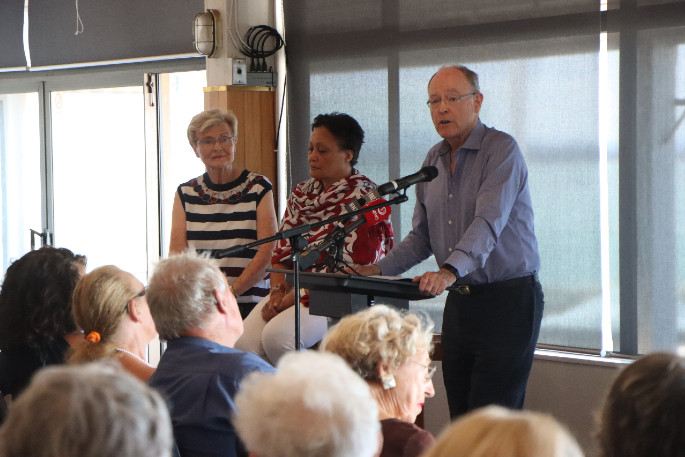 Emotions ran high at a public meeting discussing the implementation of Maori wards in Tauranga last Friday with opposing views on racism and approaches that benefit Maori.

The gathering was organised by a group called Concerned Citizens, which recently submitted a petition opposing Maori wards. Hundreds of people both in favour and against the petition attended.

Protesters standing with signs and Maori flags filled the back of the Tauranga Yacht Club club room, behind rows of seats filled to the brim with other meeting attendees.

Some of the remarks made by Brash, Casey and Ikilei were visibly difficult for protesters to hear, with many shaking their heads and tearing up.

Tauranga City Council voted to establish a Maori ward for the 2022 local government election in August last year. Concerned Citizens then started a petition calling for a binding poll on the issue.

A binding poll is required if requested in writing and signed by at least five per cent of electors.

The Electoral Office confirmed that the introduction of a Maori ward at Tauranga City Council would go to a referendum last Friday, with the petition reaching the threshold of 4742 signatures.

However, a proposed legislation announced by Local Government Minister Nanaia Mahuta last Sunday could mean the petition against the establishment of a Maori Ward will no longer be upheld.

The first stage of the legislative reform will include immediate changes to establish transitional measures making the establishment of Maori wards easier ahead of the 2022 local elections.

In his speech, Ikilei argued that everyone wants equality, and believes the implementation of Maori wards encourages segregation.

He told the crowd judging people based on the colour of their skin is “nothing less than Nazi-style racism”.

Protesters sang a waiata together during his speech.

Brash covered a range of topics. When Te Tiriti o Waitangi was raised, the crowd began sharing their opinions, with both sides yelling at each other.

Arguments for Maori Wards, and against the petition followed from iwi leader Buddy Mikaere and one other speaker.

Buddy says the fact that no other ward has gone through the same process or scrutiny proves that racism is fuelling the petition.

He says the views of Concerned Citizens and others who support the petition do not represent the views of Tauranga.

“The tides are turning. Your day is done.”

He says Maori representation on council is crucial, so Maori issues are properly represented.

"When you see that actually, almost 20 per cent of the population in Tauranga is Maori. I am sure those people are entitled to have a say in how the city operates."

I’d like to know who is now defined as being Pakeha....? Is it just the white Europeans and is this now a racist term...? It certainly is when used by some Maori, who will not accept that racism works in more than one direction.

You claim I’m an Englishman, meaning what? I speak not for Maori but for Maori rights, and against in bred blatant racism. Having lived in Tauranga and married to a wonderful Maori woman for 60yrs. I know from first hand experience the disgusting level of prejudice of many in this town. That is my only motivation to oppose the sanction of an inevitable pre determined no vote on a Maori ward. That you and many others are incapable of seeing both the short and more importantly the long term benefits of Maori having the dignity of direct representation, is nothing short of pathetic. As for your claim that I have little conception of your position, Give me a break!!! Your position speaks for itself constantly. Justice for Maori is all that is creeping into this country and that’s good for all, except the racists of course.

You say ’It is the will of many councils around NZ’. A council exists of a handful of people who are there supposedly there to carry out the will of their ratepayers. Look at the current poll being taken in Sunlive - 72% of readers are against maori wards - 28% for. Is it justice to have them forced upon us - is this democracy in action? No councillors aired their views on this subject before the last election! You are an Englishman - it surprises me that you speak up so loudly for maori when you have little conception how the rest of us feel about the reverse apartheid that is creeping into our country!

Maori can apply for any board like anybody else. It has NOTHING to do with sex, color or race. Buddy says the fact that no other ward has gone through the same process or scrutiny proves that racism is fuelling the petition. In fact what it proves is that Maori are fuelling their grievances themselves. There’s many, many European that do not get voted in too but are not causing grief and cost like this. We don’t see Indian Wards, Asian Wards etc. Enough is enough. Singing waiata and yelling and screaming like a bunch of spoilt brats. How damn rude, self centered, arrogant and devisive. Enough is enough. Why we vote for people that carry on like that. We need leaders not lunatics. I do not care what color, race or sex you are. If you can professionally DO the job, I will consider voting for you.

There doesn’t appear to much of a call for Maori ward seats. If this government is hell bent on pushing through an agenda which was never part of their election agenda then why don’t they have a referendum so all people of our multi cultural national can decide. Wouldn’t that be democracy ?

A seat awarded to a race is racisr]t. Democracy is when people riun independent of race religion etc. Why are we trying to promote racism. We should have an Asian seat, European seat, Indian seat etc etc if this is the case. Stop racism promote true democracy

Of course it's race based discrimination

Of course opposition to Maori Wards is raced based discrimination always has and always will be. Any attempt by anyone to introduce this type of representation especially in Tauranga is going come up against the racist amongst you. Remember your racism is not a Maori problem it is the domain of Pakeha. Where it becomes an issue for Maori is when Pakeha spare no expense to bring it to the notice of the general public in order to convince the people that Maori Wards are a blight on the landscape. I’m in favour of removing the right ot a binding referendum just to make it clear and will vote in accordance with that

It seems to me any discussions with the Maori always ends up with them claiming we are racist, unfortunately because they won’t listen to reason but have this huge chip on their shoulders we are getting nowhere fast. Until they are prepared to bend a little there is no hope.

that you continue to ignore the obvious is disappointing to say the least. It is NOT your democratic right to an automatic referendum on Maori wards when there is no such automatic right to object to other ward provisions. Nor is it what SHE wants, it is the will of many councils around NZ. How can you claim "disengagement" when we have the shortest term of service in the western world, 3 yrs.

Thin end of the wedge

I agree wholeheartedly with Morepork. The myth of free speech was clearly evident at this meeting, due to a simple inability to listen to an alternative view. Clearly this democratic view point is deemed invalid by Buddy and his team. This is not democracy but race based politics, fueled by a mindset of grievance. New Zealand will never be one nation as long as this type of attitude boils to the surface. We are not a team of 5 million as our Prime minister likes to think. The Government and its minister would be well advised to remember the foundation of taxation is representation, which is heavily skewed to the minority, purely for political expediency. “ No taxation without representation, the majority rules, that’s called democracy “

...is that for many people it comes down to any position against Maori wards being racist and anti-Maori (when it isn’t) and the real arguments for and against are not listened to. My objections to the wards are on purely democratic grounds and I am neither racist nor anti-Maori. But I’m pretty upset to see a Minister of the Crown do what SHE wants and remove our Democratic rights in order to do so. Buddy says no other wards have had to go through this so it must be racist. No, it means that people in Tauranga are at their wit’s end with continual mismanagement and disengagement from the community. Removing the right to a binding referendum is simply throwing gasoline on the fire. Sadly, no minds were changed at he meeting because when people are singing and yelling they are not listening. Wards are divisive and unnecessary.