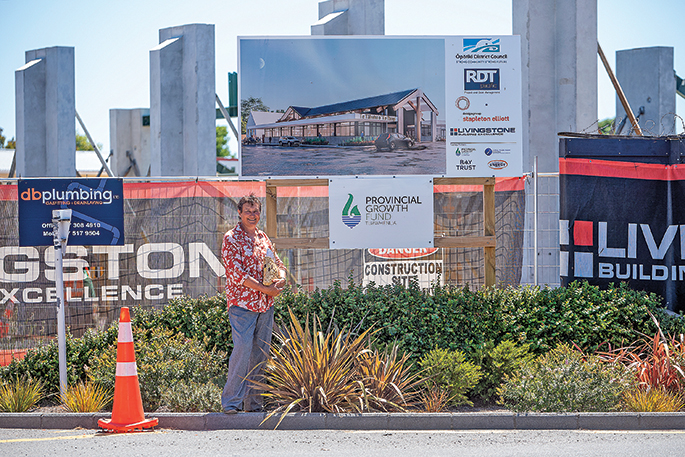 A new library, harbour and mussel factory planned for Opotiki have pushed up the value of building consents lodged by $10 million in one year, trouncing the effects of COVID-19 on the district.

Opotiki District Council chief executive Aileen Lawrie says the Government’s investment into Opotiki through the Provincial Growth Fund had also spurred private investment, leading many to say the district was now on the rise.

In 2020, the council’s regulatory team was kept extremely busy processing building consents valued at over $27 million.

This is up nearly $10 million on the previous year when the team processed consents valued at $17.5 million.

Some of the big projects include the new library Te Tahuhu o Te Rangi, a new school in Te Kaha and stage two of Whakatohea’s mussel processing factory as well as the new harbour development.

There have also been smaller jobs such as new dentist, a new roof on the Opotiki College school gym and a new pound.

Lawrie says in addition to the building consents indicating a change in Opotiki’s fortunes, there was anecdotally a lot going on in the town.

“Some industries have been quite hard-hit by COVID and lockdown but many of the businesses I have been in touch with are looking to expand rather than downsize.

“There are a lot more apprentices being taken on and it is a busy time in horticulture, trades and transport areas.

“The building consent figures back up that gut feel. If people are investing in buildings in town, it indicates that there is higher business confidence and people are seeing Opotiki as a good medium and long term investment.”

Lawrie says although a lot of the construction was being fuelled by Government spending, there was also a lot of private investment with companies and individuals upgrading or expanding their business and buildings and that had also contributed to Opotiki’s mini boom.

It isn’t just Opotiki that has seen a boom in building consents being lodged, Kawerau District Council has also had a stellar year, forecasting a positive future for the Eastern Bay.

In the last year, Kawerau council processed building consents with a value of close to $9 million, up nearly $5 million on the year before.

Work is yet to begin on Whakatane’s own PGF funded developments such as the new marina and the town centre redevelopment.

With all the action going on, Opotiki’s planning and regulatory group manager Gerard McCormack says the team is very busy and anyone approaching the council should bear this in mind.

“It’s not just processed building consents, we also had a lot of requests for advice and pre-application meetings in the later part of 2020 which suggests there is quite a lot of new housing and commercial activity in the district.

“I would ask that anyone approaching the council in the coming months bears this in mind. The team is very busy, and our new systems and processes are going well.

"But it is valuable if people plan ahead as far as possible and make sure their application is accurate and complete before lodging so that there are no delays as we go through the process.

“If you are looking to develop a property or subdivide, we strongly recommend you seek professional advice from planning consultants before approaching council.”