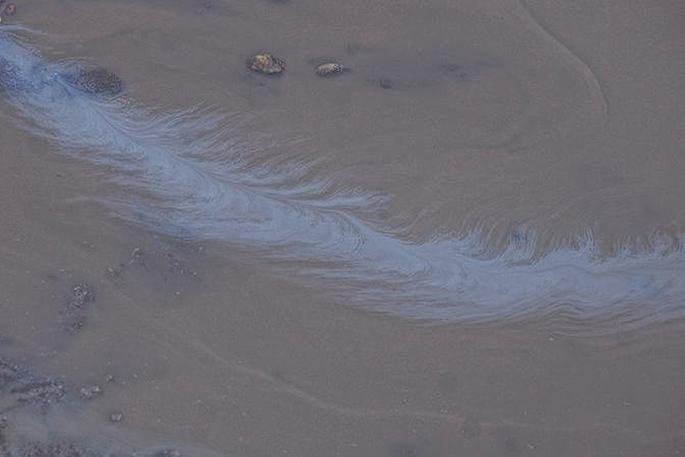 An oil slick is being dealt with off Woolshed Bay. Photo: RNZ.

Booms have been set up around the site of sunken vessel off the Coromandel Peninsula to stop a diesel spill getting bigger.

There was 2000 litres of diesel on board. Those on board at the time were able to escape safely.

A regional council maritime officer has been at the scene of the sinking since early this morning.

The council said the slick was first noticed early this afternoon and an oil spill response was initiated and it has set up an emergency operations centre.

Aquaculture farms operating in the area were contacted by the council this afternoon.

"The good news is that the slick is currently tracking away from the mussel and oyster farms and out to sea with the wind.

"We are continuing to closely monitor the weather conditions, including the wind directions, which are favourable at this time.

"We are also liaising with the owner of the launch, that is currently resting on the bottom of the ocean."

Barnett says it is not clear how much of the 2000 litres of diesel that the boat was carrying is still left.

He says the biggest area at risk is the inner Coromandel Harbour, from Whangarahi Stream to Waipapa Bay.

Rapid deployment booms have been set up and so far no diesel has washed up on shore.

The slick is heading away out to sea and should evaporate quickly in the warm weather, he says.