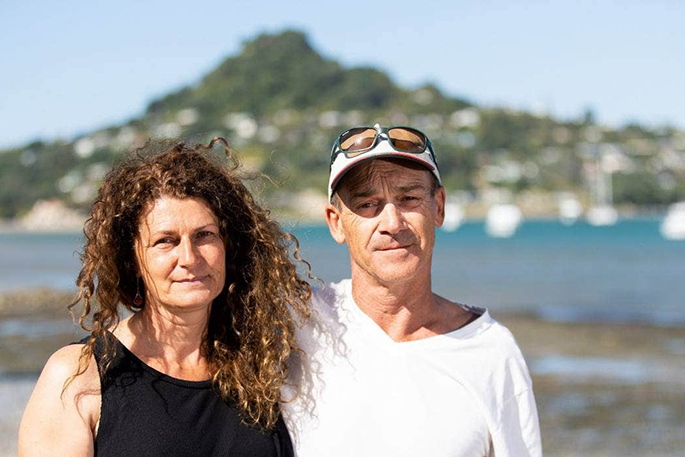 John Dixon was struggling to breathe when he felt the familiar slap of water and the sound of raised voices on Tairua Harbour.

Two vessels, speeding past either side of the yacht where he lives, had woken his partner Christine from sleep.

The wind and wake from the vessels lifted his own yacht and dumped it on the dinghy – puncturing it, Dixon says.

Angry, he jumped into the dinghy: “I thought I'd give them some of their own medicine and see how they like it, so I did a few donuts.”

Dixon throws up his hands as he talks to Stuff: “At the end of the day, it was my fault.

“I shouldn't have done it, I was concerned about my life.”

Dixon is now infamous for his part in a fierce boat confrontation on January 23, where the video of the incident made headlines.

It involved him following and ramming into a speeding boat, where expletives flew between him and two female occupants.

One was Tairua School deputy principal Catherine Browning, who ended up jumping out of the boat and swinging an oar at him.

In Dixon’s account he followed both vessels, aiming to give them a “taste of their own medicine", but only wanted to ram them once.

He says he didn't see the children on board, but he heard a couple of “blabbermouths” instead. 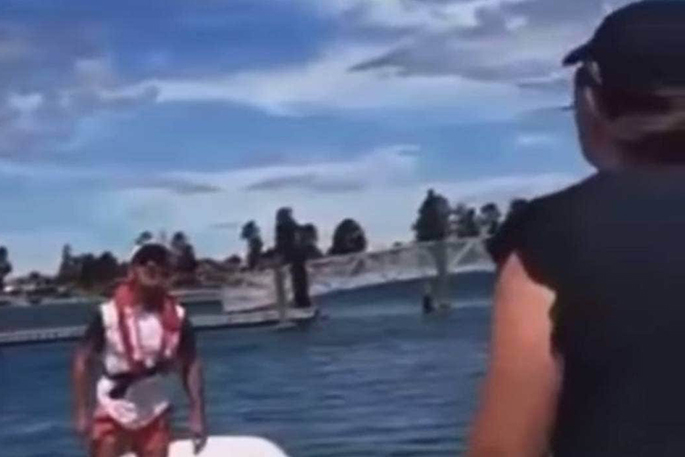 John Dixon says he regrets the incident on the water and feels bad for Catherine Browning, the other party involved.

At this point, his dinghy was sinking, but in an effort to splash the other boat he misjudged the turn and rammed it again, Dixon said.

Browning has not responded to several of Stuff’s attempts to contact her.

Dixon claims the speed caused about $1000 of damage to his dinghy. But the repercussions for both parties could be far worse than the gaping hole in the raft.

Charges have not yet been laid and police are investigating the incident.

Dixon's past of anger

Dixon's past has resurfaced: In 1978, when he was 16-years-old, he caused fatal head injuries to night watchman Joseph “Little Joe” Hishon outside the Ruakura Agricultural Centre in Hamilton.

Dixon was convicted of murder and sentenced to life imprisonment. Media reports show he served eight years before being released on parole in 1987.

Waikato Times articles from the time report the 51-year-old died from a skull fracture and brain damage, and was found lying in a pool of blood.

He admitted to the court he kicked Hishon in the head, but that he didn’t mean to kill him.

Corrections have applied to the parole board last week to recall Dixon to prison on grounds he poses a risk to the public.

The parole board has denied that application, but will meet with Dixon next month.

Dixon says he’s been dealing with his anger all his life, and it's the “people I love that suffer".

"I was kicked out of home around 11 years old, supposedly uncontrollable...it was all tough love back then.”

He was sent to a boys’ home, which was later shut down because of the gruelling conditions.

He was a lost “street kid”, whose life changed forever after his murder conviction, he said.

It’s difficult to be judged for something he did over 40 years ago, but he does think of the victims, he says.

“That's the people I do feel worse for, is the victims, the Hishons and their family, all this has dragged it all back through the mud again for them...you know, I think he was a twin,” Dixon says trailing off.

“I do feel bad for her, that’s her life's work in jeopardy.”

A build-up behind the rage

Dixon has a serious heart condition including moments where his heart rate escalates to high speeds and can’t slow down, he said.

His dinghy was particularly important to him to get him back onto land as medical help in the harbour could be difficult, Dixon says.

Speeding boats were a “constant” on the yacht where he has lived the past three years.

He and Christine regularly have drinks spilled, dinner plates upended, and occasionally their yacht rammed into.

“I regret that I lost my rag, but at the same time, I don’t want to be stuck out on my boat dying because a bunch of idiots can’t obey the law of the sea.”

‘It was always going to happen at Tairua’

Tairua Ferry operator Rob Glasgow says he has been complaining about speeding vessels through Tairua Harbour to the Waikato Regional Council for the past five years.

From Boxing Day through to Anniversary weekend, the speeding boats happen multiple times an hour.

Boat after boat, jet ski after jet ski whizz past, “jumping around like a three-year-old on sugar”, he said.

Kayakers, swimmers, wakeboarders and mooring vessels are in danger from the speed.

“There is no reason whatsoever these people should be so inconsiderate to their neighbours.”

A marine contractor, who did not want to be named, told Stuff the 2020-2021 summer was the worst he's seen for speeding vessels.

“Nine times out of ten the incidents and the speed comes from inexperience.”

He travels among the Coromandel harbours, and said Tairua is the worst of them all.

It was a constant frustration and stress for those living and working on the water, he said.

The Tairua boat rage incident was an unfortunate tip of the iceberg to a problem that’s been building for years, he says.

“They were both in the wrong.”

Yeah... I can empathize with both parties. Basically. It seems...he’s tired of inconsiderate people and admittedly struggles with anger issues. The other party/parties were in their own lil world having too much fun and either didn’t know or didn’t care for speed regulations. No excuses for the behavior of all involved. Learn and move on. No-ones proudest moment here.

It takes courage to come out and face the public. Good on you. Yeah I know what you mean about the Idiots on the water.good to hear both sides. Facebook and Twitter are a terrible platform gives only one account. All the best for your future

5 knots or no wake

Now we have heard both side of the story.Believe which one you want to.But the ruleis as you all should know and respect is,when in close quarters to others,sick to 5 knot or no wake.