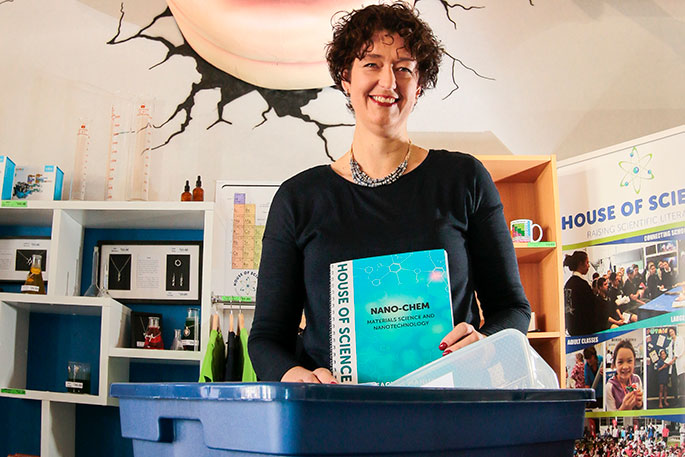 Teachers are worried science may be neglected in the rush to halt the decline in students' maths scores.

The Ministry of Education is convening experts, asked the Royal Society to investigate, and has spent $40 million on teacher training to improve maths results.

But science marks are also dropping and there are warnings of dire consequences if something is not done.

Just 20 per cent of primary and intermediate aged children are reaching expectations in science - with that subject the worst of any in the curriculum for Year 8s.

An Education Review Office report showed 73 per cent of primary schools did not have an effective science programme, she says.

"Walk into most primary schools in the country and ask to see their science resources and there'll be one little bookshelf dedicated to science stuff, which will usually consist of a box of random magnets, some electronic stuff and maybe some broken glassware.

"And nobody uses it, because they don't know what to do with it."

Chris says if nothing is done, the cost to society will be "astronomical", harming people's ability to distinguish facts from lies and fuelling irrational beliefs such as the anti-vax movement.

"With the power of social media now, it's so easy for people to put semi-truths or false truths out there.

"And if we have lost the ability to be a little bit cynical and to question things then we're in deep trouble."

Chris did not know why the MoE is not doing more to stop the decline.

Association of Primary Science Educators national coordinator Sandy Jackson says she will love to see science getting the attention and resources now going into maths.

Teachers are being asked to do too much in too little time, and science got pushed to the side by teachers who were not confident they knew what they were supposed to be teaching, Sandy says.

"Not being too prescriptive but at least giving some guidance to teachers to know where they're actually trying to take the children to: What are they aiming for?

Principals' Federation president Perry Rush says while schools did not want to lose the ability to set their science programmes, the MoE needed to lay out more clearly what was expected in the curriculum.

"The job for the ministry is to be working with the profession, to bring a conversation to how we build clear understandings about what science is, and what learning is most important in the science curriculum," Perry says.

A crisis was approaching and the MoE needed to act fast, he says.

"It's absolutely appropriate that we draw a line in the sand and say 'we must move quickly now and we must take this very seriously'.

"We need to be an economy that is competitive in the world."

The MoE says in a statement it provided quality online resources and support to help schools teach science.

It had spent about $30m in the past four years on teacher training in science.

The school system is fraught with issues. This is just the tip of the iceberg. Robert Kiyosaki has a good book called. If you want to be rich and happy don’t go to school. A great read. Belief systems need focus. Children are taught from day one. A certain number of you will pass and some will fail. You’re smart. You’re dumb and won’t amount to anything. Labelled. Day one. Need them believing they can do it before hitting the books.

I’m wondering who’s to blame for diminishing the value of the three "R’s"...? Achievement focus is being skewed towards inclusiveness and ensuring everyone gets a nice little pat on the back... WHAT have the prison services been shouting for decades...? A high percentage of our dysfunctional population who enter the prison system can’t read, write or understand basic mathematics... But they can probably run around a field, sing a waiata or the school song, perform a haka or perform in a school play, paint a picture and use a personal computer to play games at above expected levels. Let’s have some of the mandatory educational requirements outside of the school day. Once again it’s about nice to haves superseding must haves at an enormous cost.