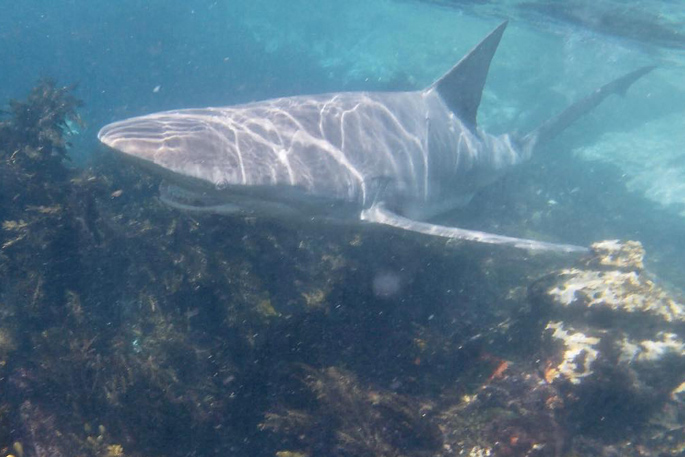 New Zealand waters are home to about 113 shark species and their relatives. Photo: Photo /Supplied/File

A lack of information about New Zealand oceanic shark populations is making it difficult to assess how well they are doing, says a NIWA researcher.

New research published in science journal Nature last week, with input from NIWA, showed the global population of oceanic sharks and rays has declined by more than 70 per cent in the past 50 years, with ongoing decline likely to lead to the extinction of some species.

NIWA fisheries scientist Dr Brit Finucci says New Zealand waters are home to about 113 shark species and their relatives, of which 20 are considered oceanic, meaning they spend most of their time in the open ocean.

While most of these species are not considered threatened in New Zealand, Dr Finucci says there is a rapidly growing body of research linking shark movements to environmental changes.

"We don’t have that information for New Zealand, and this is something we should start investigating. It is very hard to assess the status of many sharks in our waters because we don’t have shark-specific monitoring programmes."

Some data is opportunistically collected either by other research surveys or reported by commercial fishers and fisheries observers.

"For some species we have noted possible declines in recent years, but we are unsure if these trends are a real decline in abundance, a change in the fishery, or a change in animal behaviour."

The Nature paper noted that in the Pacific Ocean, abundances decreased steeply before 1990, and then declined at a slower rate recording an overall decline of 67 per cent.

The global decline of oceanic shark numbers is mostly attributed to a huge increase in fishing since 1970, with half the world’s 31 oceanic shark species now listed as endangered or critically endangered by the International Union for Conservation of Nature (IUCN).

Recently retired NIWA scientist Dr Malcolm Francis was a member of the IUCN Shark Specialist Group for more than 20 years and was a co-author of the Nature paper, contributing analysis of the blue, mako and porbeagle sharks.

"New Zealand not only has globally threatened oceanic species, but also some globally highly threatened deep-water species as well. We know these species are very susceptible to population declines because of their biology," Dr Finucci says.

"NIWA has taken on a wide variety of shark research projects in the past including indicator analyses and stock assessments - these are important for monitoring shark populations. However, in order to do this modelling work, and do it well, we still need a lot of fundamental research of species’ biology and ecology. "

Dr Finucci says research that needed to be done included mapping critical habitats for populations, particularly nursery areas and pupping grounds, and determining movement patterns of sharks within New Zealand and beyond to inform the best timing of potential closed areas or seasons.

"Sharks have been part of our oceans for millions of years and if they disappear it is likely to be noticed in ways we haven’t yet measured."

"There is an urgent need for governments to adopt science-based catch limits for oceanic sharks that are capable of supporting sustainable fisheries, along with bycatch mitigation."

Globally Endangered. Managed under the QMS

Globally Vulnerable. Managed under Schedule 4C of the Fisheries Act 1996

...they’re just holidaying in the Bay of Plenty...