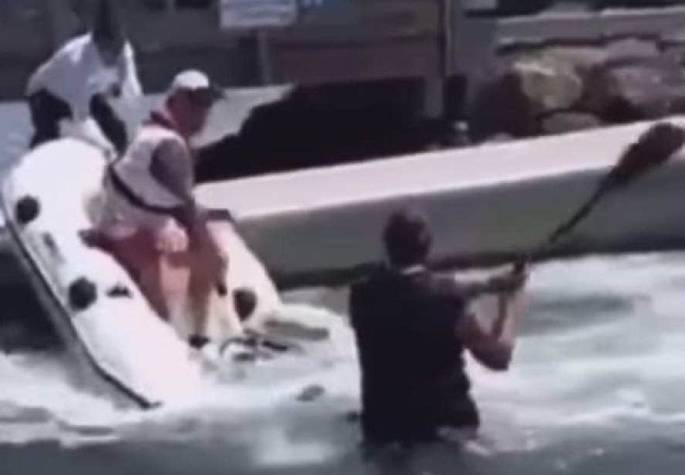 The heated altercation happened on January 23, in Tairua Harbour on the Coromandel Peninsula. Photo: Supplied/Stuff

Investigations are underway following an altercation between boaties at Tairua Harbour.

A video of the incident has been posted to social media and shows a man in an inflatable boat ramming another boat, before an oar-wielding woman jumps into the water.

Footage of the January 23 confrontation has been widely shared on social media, including on the NZ Fishing Community Facebook page, and police and the local harbourmaster are investigating the altercation.

In the video, the man claims the woman's larger boat had broken the speed limit and caused $1000 of damage" to his vessel.

After yelling and swearing between the pair, he rams the woman's boat, which has children on board.

She then wades over to him with an oar, getting a couple of swings in before a bystander takes it from her.

The man involved in the incident is a Tairua local, a marina spokesperson has previously said.

The faceoff happened near Tai Paku mooring, the spokesperson said.

A police spokesperson says they had been contacted about “a dispute and reported assault at the Tairua boat ramp” and are making enquiries.

There was nothing to update on Sunday as to what had led to the incident or whether any charges had been laid, says police.

Good on the lady she has every right to protect her family. And that guy in the inflatable sounded drunk as a skunk !!!