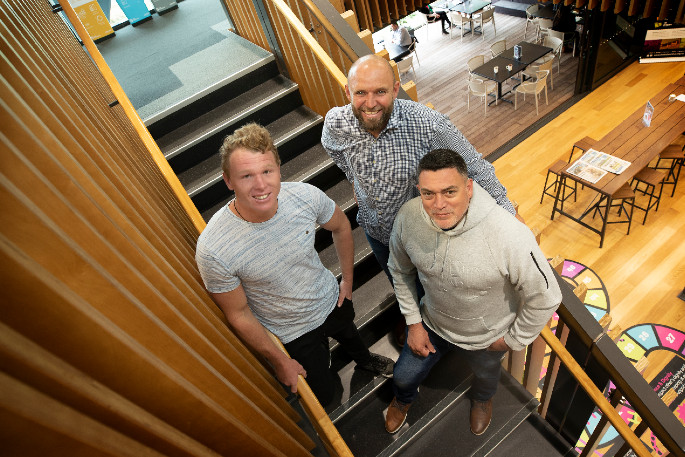 An award-winning group that supports boys without fathers in their lives, is seeking more kind-hearted adult males to volunteer with them in 2021.

Big Buddy has won an Excellence in Community Contribution category at the 2020 Westpac Business Awards in Auckland and has a waiting list of more ‘little buddies’ needing support.

The concept is simple: Big Buddy matches up volunteer men with youth who don’t have a father-figure in their life, in order to provide consistent support and mentorship for the boys.

There’s currently a waiting list of ‘little buddies’ out there and more men are being invited to apply to become a Big Buddy in 2021.

The charity operates in Wellington, Auckland and Waikato, and expanded to the Bay of Plenty earlier this year due to increasing enquiries from mums and caregivers here.

Big Buddy CEO Paul Burns was in Tauranga earlier this week to meet with volunteers and supporters.

He is proud that the Westpac Award means Big Buddies are being acknowledged for the contribution they’re making to their communities.

“A great guy showing up, spending time - and importantly, coming back - makes a huge difference in the life of a boy who doesn't have his dad around,” says Paul.

A marked increase in confidence, happiness and general wellbeing are among the benefits reported by participating boys, and their mums and caregivers.

Being a Big Buddy involves a commitment of around two to three hours a week for at least one year.

A generous yet simple gesture, it makes a big difference to these boys, some of whom have had a particularly difficult childhood or upbringing.

“It’s important for me to say that just because they don’t have dads in their lives, these boys aren’t broken,” says Paul.

Their mums and caregivers are doing an incredible job by themselves. What the Big Buddy is doing in a lot of cases is backing up mum or the caregiver by demonstrating and reinforcing good behaviour.

“The essence is these men are putting these boys first and great things are happening because of that.”

‘Little buddies’ are aged between seven to 14 years and those are the most important impressionable years for a boy, Paul says.

There are many reasons why they may not have a father-figure in their life. Some have never met their fathers, or they may have lost them at an early age.

“Thousands of children in this country are affected by a parent in prison – most of them fathers – so there’s a gap there that we need to fill,” says Tommy.

“Everything we’re doing with Mike King around suicide is all about not letting these kids ‘fly solo’, so that’s why Big Buddy is a great kaupapa and we should support it.”

As for the ‘Big Buddies’, they come from all types of backgrounds and life stages, and include businessmen, sportsmen and filmmakers.

However they’re a humble bunch when it comes to talking about their Big Buddy efforts.

Sid Russell is one such volunteer. Now a businessman and married with three daughters, he says he came from a bit of a broken, disjointed home as a youngster.

Having experienced first-hand what the lack of a consistent father-figure was like, he now wants to provide another boy with the kind of support he missed out on.

His wife and daughters supported his decision and Sid says signing up for a couple hours a week out of his life seemed ‘miniscule’ in the whole scheme of things.

The little buddy Sid has been matched with is 10yrs old and they meet up on Sundays.

“We spend a bit of quality time together in a variety of different ways, whether it’s throwing a ball around in a paddock, shooting hoops, or going fishing or bowling.”

Last weekend they went to the rugby.

Big Buddy’s mentoring manager for the Tauranga region is Matt Anderson-Smith and he too grew up without a mentor after his father left when he was young.

“That left a pretty massive gap in my life, where I made a lot of decisions that could have been better,” says Matt.

Some of the people he chose as role-models weren’t the greatest and it took him a long time to learn what a good mentor was and the value of one.

“So it’s pretty personal for me what we’re doing here.”

“I get to put a good man in a child’s life with the boys here in Tauranga,” says Matt.

Matt’s made seven successful matches so far and there are another 36 boys on the waiting list.

A further 27 volunteers are currently going through the Big Buddy application process.

The feedback from little buddies and their mums has been amazing and Matt says he feels very grateful to be in the position he’s in.

Potential buddies can apply at: www.bigbuddy.org.nz