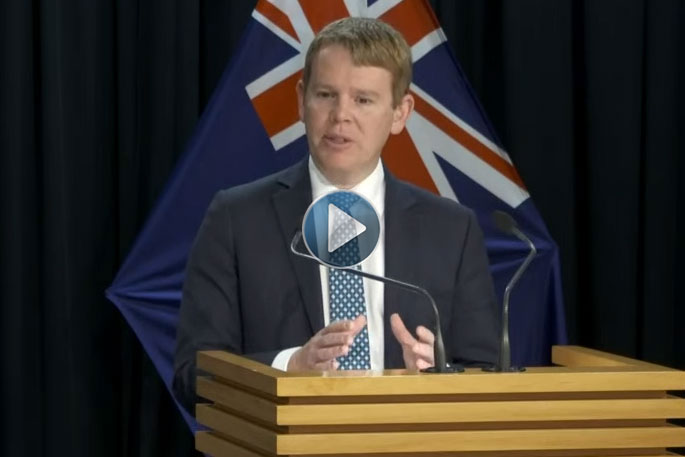 All returnees in managed isolation will stay in their rooms after receiving their day 12 test until the end of their stay in quarantine, COVID-19 Response Minister Chris Hipkins says.

The Minister for COVID Response Chris Hipkins and Director-General of Health Dr Ashley Bloomfield will is providing an update on COVID-19 today.

In a media conference this afternoon, Hipkins confirmed the two new cases of COVID-19 that were confirmed last night are a father and daughter.

Hipkins says preliminary genomic sequencing showed a link between them and the Northland case from the Pullman Hotel.

The two completed managed isolation in the same hotel and at about the same time as the Northland woman, but were on a different floor from her.

Hipkins wouldn't divulge which countries the two cases arrived from but says it's neither South Africa nor the UK.

Everyone who has been at the Pullman during January will now be tested.

Hipkins says further test results today will confirm if the new cases are active, or remnants of an old one.

"We are proceeding with a great degree of caution. Close contacts have been identified and been asked to isolate and test."

The Health Ministry has also put out a list of places the pair have been to.

At this stage, Hipkins says there is no reason to impose restrictions on gatherings in the Auckland region as there is no evidence of community transmission.