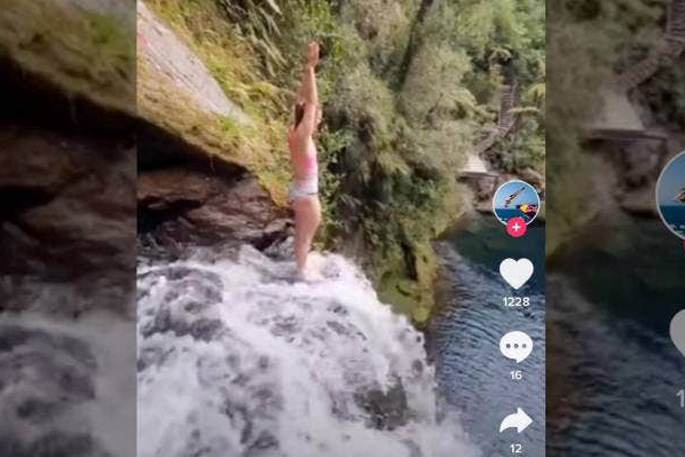 The footage begins with Iris Schmidbauer standing in a strong current. Photo: TIKTOK.

A Red Bull cliff diver has posted footage on social media of a daring jump off a dangerous and closed waterfall near Tauranga. Now, officials want it deleted, saying it could encourage risky behaviour.

Omanawa Falls has long been closed – with several no entry signs – because the steep and dangerous track poses a serious risk of injury.

In early January a man died after he got into trouble. It's not yet clear if the incident was on the track, or in the water. Another man drowned in 2018, and an increasing number have needed rescue.

The social media popularity of the falls has been blamed for the increased crowds – despite it being closed. One of the most high profile posters has been Red Bull cliff diver Iris Schmidbauer.

In September last year, the German high diver posted a video to her 288,000 Tiktok followers jumping off the falls. It started with her at the top of the waterfall in a strong current, with a spectator filming her.

She then proceeds to somersault off the top. A second angle of the jump, looking up from the bottom, shows the photographer leaning over the side, hanging onto a rope while he films the jump.

According to a recent 1 News profile, Schmidbauer arrived in New Zealand before the Covid-19 lockdown and has been stuck here ever since.

The article explains her love for New Zealand, "It's just a chilled vibe. I feel connected to nature, I can find some cliffs to dive off as well – it's just a great country."

It also reports the 25-year-old wants to stay in New Zealand longer and is applying for a talent visa.

The Tauranga City Council, who administers the waterfall, is not impressed.

"Regardless of who you are, there is no public access to the Omanawa Falls. If you choose to visit the Omanawa Falls you risk your life and those of the people who may be required to rescue you," says Paul Dunphy, the council's director of spaces and places.

"We've had two fatalities and multiple injuries at this location. It doesn't get more serious than this."

He added that the video should be removed, "we believe it would be the responsible thing to do."

Schmidbauer has not responded to multiple requests for comment. Red Bull also refused to comment, saying she was not a paid member of the Red Bull team – although it did confirm she was part of the Red Bluff Cliff Diving circuit.

Newsrag urged to remove stories highlighting the existence of waterfall that has resulted in numerous deaths.

Don’t renew her "talent" visa (whatever that means) and send her home. She shows a total lack of respect for NZ and yet she wants to stay longer, most likely so she can get more footage and followers for her social media account.

The stream carries tree debris over the falls. Getting spiked by a tree branch is going to be fatal or a long time in a hospital. Either way - life changing.

Such a lack of respect for the falls site, and the multiple deaths there (including very recent ones) and spreading dangerous actions on social media about a CLOSED site, the woman should be sent back to where she came from. We sure as heck don’t need more tourists coming and requiring our rescue services!