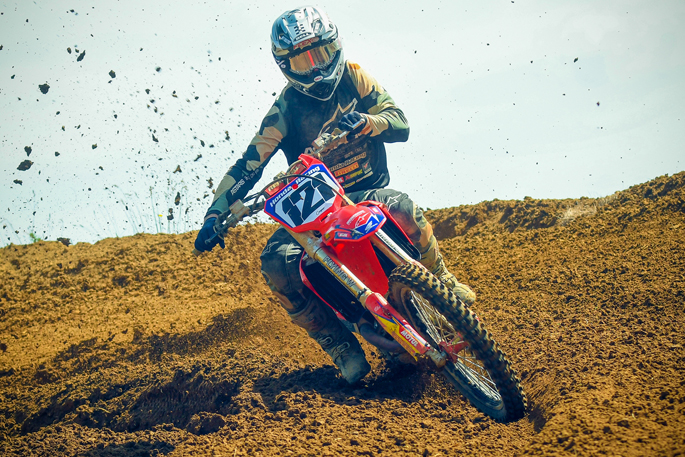 Cody Cooper on his way to winning the MX1 class at the annual King of the Mountain motocross on Sunday. Photo by Andy McGechan, BikesportNZ.com.

Mount Maunganui’s Cody Cooper is finding form just when it matters, with the Honda man celebrating a solid win at the annual King of the Mountain motocross in Taranaki.

With the Honda New Zealand Motocross Grand Prix at Woodville now less than a week away, Cooper knows now is the time for him to bring out his A-game.

And he surely did that for Sunday's senior race day at the Barrett Road Motorcycle Park, on the outskirts of New Plymouth.

With heavy rain falling on the freshly-redesigned Taranaki track, racing had initially looked like an extremely daunting prospect.

After a lengthy delay, the sun arrived and the circuit had dried out, allowing for some of the best race action.

Cooper took his Honda CRF450 to dominate the premier MX1 class at the King of the Mountain, finishing 2-1-1 in his three races.

The KOTM event was a perfect warm-up for the championship season ahead.

Cooper is not only this season hunting down his fourth Woodville GP crown – he won there in 2007, 2014 and 2019 – but he is also chasing his eighth national MX1 title.

The KOTM event was the ideal time for him to finally decide on bike settings.

"The suspension is awesome and, with minor changes to suit me, I'm loving this Honda.

"Riding this track was fantastic. The rain last night and this morning actually helped things. The club here has done a great job ... doing just the sort of work on the track that I've been asking clubs to do for a long time. They were doing all the grooming here without me even having to ask for it.

"The dirt here is always slippery, but today was perfect. Maybe it's just that the bike was so good," he laughs.