Tauranga Half winners take out race in record time 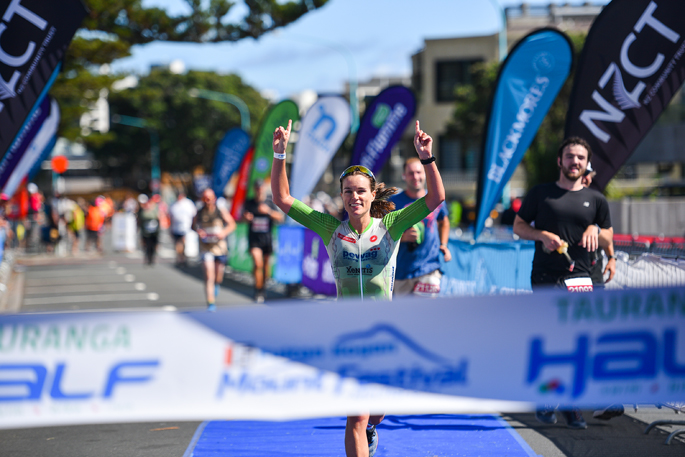 The Tauranga Half produced two outstanding races with both the men’s and women’s winners finishing in record time.

The 32nd running of the Tauranga Half today drew the best elite fields for many years, and one of the most sensational finishes in the history of the race.

Kyle Smith looked to have the race under control with a 3 minute 20 second lead heading out on the run leg, but after hitting long distance sport’s infamous “wall” around the Mount Maunganui’s base track, had to rely on willpower to hold off a fast finishing Currie, before collapsing over the finish line.

Smith says, “I am in pain right now, but that win is going to last forever”.  Smith led the men’s field from start to finish, to record victory in a time of 3:39:43, taking 2 minutes 24 seconds off the course record, that he set last year.

He had an outstanding swim, putting a 48 second gap on the Braden Currie and Mike Phillips, out of the water at Pilot Bay.  He extended his lead on the 90km bike leg, with his time of 1:58:26, making him the first man to go under two hours for the Tauranga Half bike leg.

Legendary multisport athlete Braden Currie started the final loop around the Mt Maunganui base track just over 3 minutes behind Smith, but came off the base track with just a 30 second deficit.  Kyle Smith had to summon every piece of strength in his body to fend off Currie in the final sprint down Pilot Bay.

Describing the final leg of today’s race, Smith says, “I felt good for the first 10k, and then ran into a brick wall.  With 5kms to go, the lights had gone out, and there was nothing left.  I hit the Mount base track in pretty bad shape, and then with 600m to go I could hear Braden coming.  I just gave it everything, opened up the taps, emptied whatever was left in the tank, and managed to bring it home.” 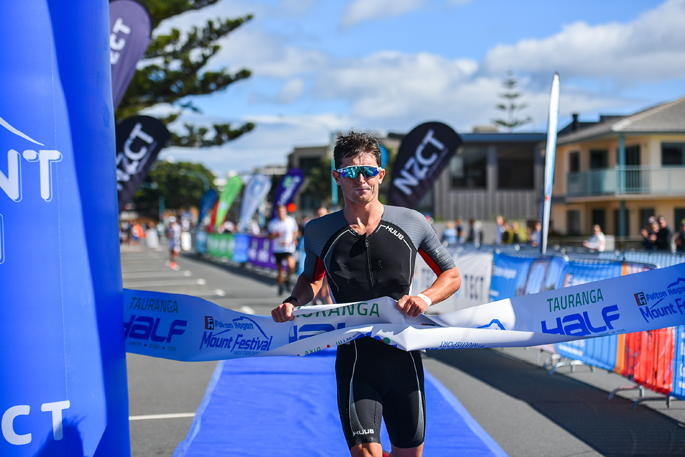 Despite only losing by 10 seconds, Currie was gracious in defeat saying, “Kyle is a phenomenal athlete right now, and is incredibly hard to beat over this distance.”

The women’s elite race was equally dramatic in the quality of performance from race winner, Auckland’s Teresa Adam.  Adam is one of the world’s best over the full Ironman distance, but today showed she is a force to be reckoned with at the half distance, smashing the race record, held by Olympic athlete, Sam Warriner since 2009.

After taking 13 minutes and 46 seconds off the course record, Adam says, “I’m really stoked.  I haven’t raced here in a couple of years, so to come back and race like that was really pleasing.”

Adam had a great swim, just six seconds behind lead woman Rebecca Clark.  However, it was the bike leg that proved to be the defining section of today’s race, with Adam’s bike time 3 minutes 39 seconds quicker than her main challenger, Hannah Wells.

Teresa Adam is the national cycling time trial champion, and this form showed at Mount Maunganui today.  “Over the last few years, I’ve worked hard on my cycling.  I have mainly targeted the Ironman distance but with less racing due to COVID, I’ve come back to the half distance and found the extra strength from training for Ironman events has been really beneficial,” says Adam. 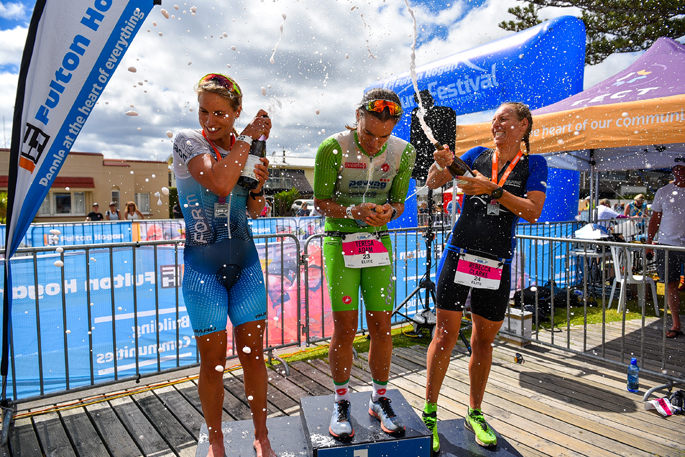 Hannah Wells was seeking a third consecutive victory on her home course, and went out quickly on the run in an attempt to reign in Adam.  However, the strength of Teresa Adam shone through on the run course, to record a 4 minute 45 second win over Wells.

Adam was delighted to record her first win at the Tauranga Half, over the two-time defending champ.  “Hannah is an amazing athlete at this distance with numerous wins in NZ and overseas, so to come out with the win shows that I am on the right track,” says Adam.

Wells was gracious in defeat saying,  “I’m proud of my performance, but Teresa raced an incredible race out there today, so full credit to her.”

There were some other notable performances at today’s Tauranga Half, with Jack Moody recording a phenomenal 1:10:53 half marathon to fly home for third in the men’s race, while the evergreen Cameron Brown finished fifth in the men’s elite race to show that he will still be a force to be reckoned with in March’s NZ IRONMAN Championships. 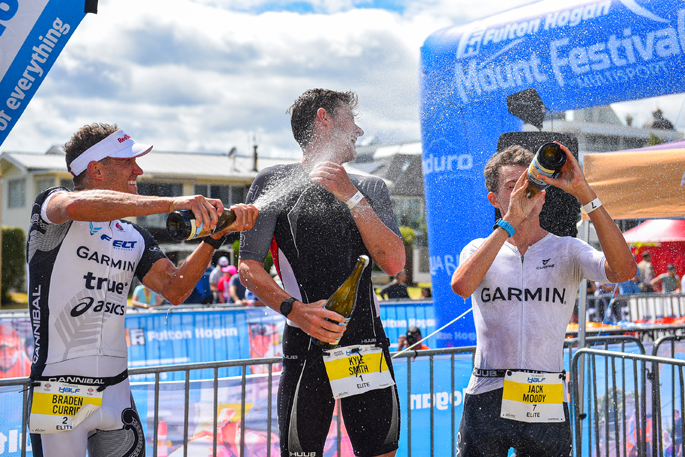