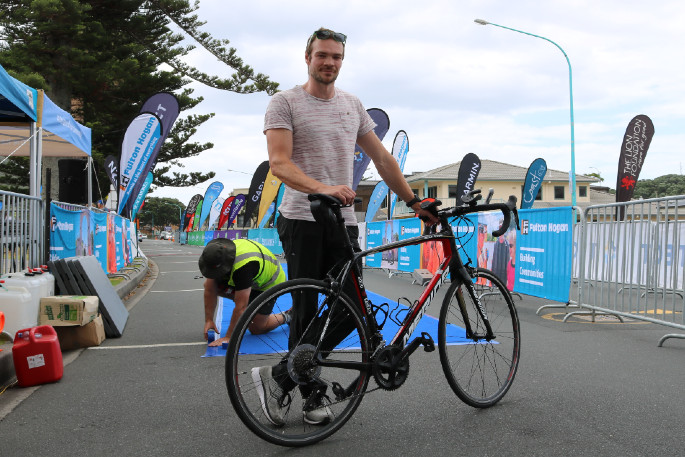 Matt Aldridge will take on his first half iron man in at Mount Maunganui. Photo: Ursula Keay.

A man who couldn’t walk a year ago is gearing up to complete a half iron man.

The Tauranga Half, described as one of the longest running and most popular triathlon events in New Zealand, is made up of a 2km swim, a 90km bike ride, and a 21km run.

Matt Aldridge, an accounting student from Christchurch, was told he’d never move his legs again after a serious paragliding accident two years ago which injured his legs, pelvis and back.

He says competing in the event is definitely on the boundaries of what he can do.

“I’m nervous and excited. It’s been so long in the making, but I’m really nervous about the pain there might be.”

Previously a keen mountaineer with two paragliding licenses, he crashed into a rocky outcrop in July 2018 while paragliding in Christchurch’s Port Hills.

He was travelling at around 60kmph, and sustained severe leg injuries.

He says he came round a corner and went straight into a rocky outcrop.

“I came to a stop and tried to move my legs but there was nothing.”

He was in a wheelchair for six months and had several operations with 30 pins inserted.

Matt was told he’d never move his legs again, but never believed it.

“I thought if I worked hard I’d eventually walk again.”

Matt is completing the triathlon in support of the Canterbury West Coast Air Rescue Trust that he credits for saving his life and legs. Matt believes he would have been paralysed if it wasn’t for them.

“I myself am here because of them. It's the reason why my family hasn't buried a son, a brother. I want to make sure that this service is around and that other families can remain together.”

He has set up a Give a Little page titled ‘Racing for the Rescue Chopper’ to raise money for the trust.

The 26-year-old currently has multiple fused vertebrae and his legs are largely paralysed. His left ankle joint has been pieced together and has very limited movement, while part of his right ankle joint is fused which has resulted in the fixation of his toes. 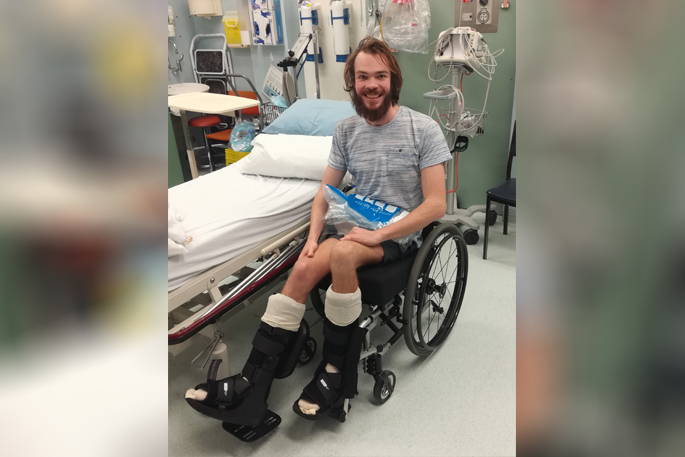 Matt after his accident in 2018. Supplied image.

He says walking itself is painful and running any distance is nearing impossible, but he wants others to have the chance he had.

“It will be a bit painful for me but maybe someone will donate and maybe that will help someone else.

“I want other people to have a second chance.”

He doesn’t have a funding goal, but says every little bit counts.

Training for the triathlon was a feat, as after half an hour of running he would be in agony for the next day.

He built up to a training regime which included six days a week in the gym, two or three swims a week, two runs a week, and three or four bike rides a week.

He will complete the running section on crutches, and is confident he’ll finish.

The Canterbury West Coast Air Rescue Trust, which has flown 14,000 rescue missions since it was founded in 1989, relies on community support to keep the service operational.

Spokesperson for the Tauranga Half Dean Wilson says Matt has overcome massive odds.

“It’s a miracle he is there, two years after he was rescued from a bad accident.”

He describes Matt as an amazing guy, who is very determined and fit.

The Tauranga Half will kick off around 6am tomorrow morning.

For more information visit Matt’s Give a Little page.