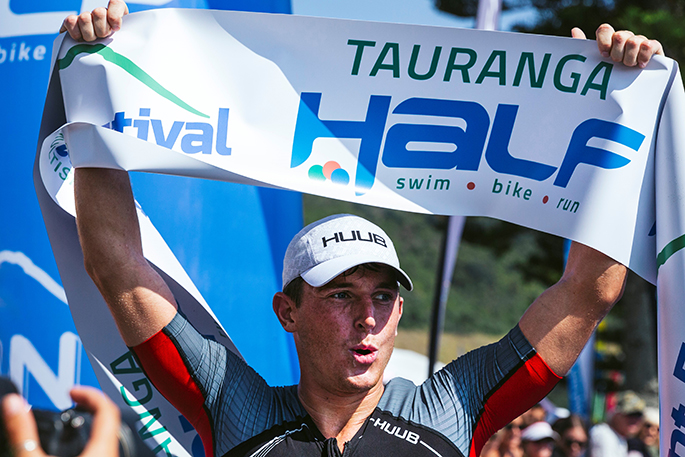 Cambridge-based triathlete Kyle Smith has taken the long distance triathlon world by storm over the past eighteen months.

He is now looking to defend his Tauranga Half crown this Saturday, against one of the best fields ever assembled for the event, says event organisers.

It all started for Smith in December 2019 with a classy victory in his debut event – the Taupo 70.3.

This performance put the triathlon world on notice, before his second crack at this distance put them on alert.

He dominated the men’s field in the 2020 Tauranga Half from start to finish, to record victory in a time of 3:42:07, smashing 3 minutes 31 seconds off the course record, set by Braden Currie in 2017.

After the event, Smith acknowledged the man whose course record he had just broken saying “Braden Currie is such a classy athlete, who has paved the way for athletes such as myself to follow. I hope he returns to the race next year”.

Smith gets his wish on Saturday with legendary multisport athlete Braden Currie back at the Tauranga Half for the first time in four years.

Currie is joined by 2019 winner Mike Phillips, last year’s runner up Jack Moody, along with 10 time race winner Cameron Brown, as part of the best men’s field that the Tauranga Half has assembled.

Kyle Smith is aware of the formidable challenge to his title.

“The field for the 2021 Tauranga Half is the best there has been for a while, with a very classy field of athletes racing. I am excited to toe the line alongside them.”

He is an athlete aiming for excellence.

“It will be huge for me to defend my title after having such a good performance last year. It would be the cherry on top to break the course record I set last year too.”

A strong time is on the cards with the bike section of the Tauranga Half now taking place on the new Toll Road, as opposed to a three lap stretch up and down Ocean Beach Road, with judder bars to contend with.

When assessing the course change, Smith says “the new bike course is very exciting, a super flat and fast new road surface that should see some lightning fast bike splits on Saturday".

Kyle Smith looks to be in good shape heading into this year’s Tauranga Half winning the Rotorua Suffer event in December, taking 22 minutes of the race record in the process.

“My training has been really consistent compared to last season.

"Last year, I picked up an injury around Christmas and had to have some time off running, so hopefully this year I will see a better run performance.”

He can’t wait for this Saturday’s event which starts at 6:35am on Pilot Bay.

“I am very happy to be racing again in 2021, we are so lucky in NZ to be able to race and would like to thank the team at Tauranga Half for making this happen."

General Manager of the Fulton Hogan Mount Festival Lauren Watson says the elite field for the 2021 Tauranga Half is “the strongest it has been in over a decade".

"It will be an absolute showdown this Saturday.”