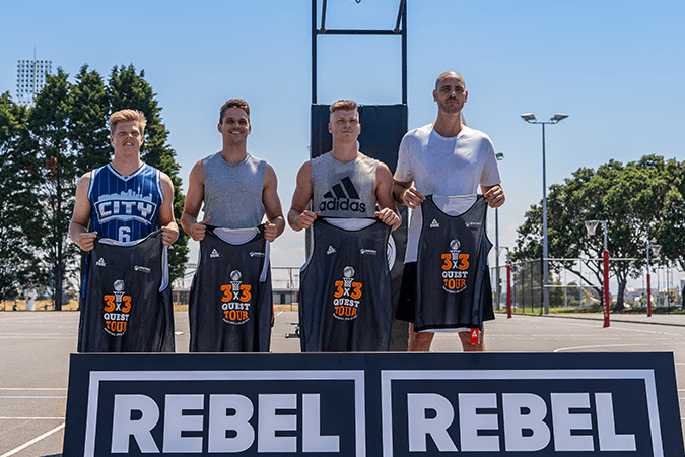 The Tauranga leg of the tour took place at the weekend. Photo: Supplied.

Bridge has taken out the Open Men’s grade of the 3x3 Quest Tour at the Harbourside Netball Centre in Mount Maunganui.

The champions qualified for the showdown riding a six-game winning streak and beating the 99ers 22-10, to cap off a great display of basketball at the weekend.

Bridge captain Phil Borota says the team came together as the day went on and they hit their straps at the business end.

“We started shaky by dropping our first game, but after that, we picked it up. For most of us it was our first time playing together so as the day went by, we started to get into a rhythm.

“Ball movement was the key to our success in the finals. We kept passing it on to the open guy and were confident when any of us had a decent look.”

He also mentioned how he prefers basketball’s shortened format and encouraged fellow hoopers to get along to the upcoming legs.

“The lack of coaching means you can do everything you want to do as a player and as a team. It’s nice being able to go out there and not feel controlled.

“There were a few people here, but it’d cool to see more at these types of things. They should just give it a go, regardless of the scores there will be, it’s a good time and you’re out in the sun all day – what more could you ask for.”

Three other grades made up the second stop on the Tour, those competitions being the Youthtown Senior Mixed, Junior Girls and Junior Boys.

Kati Strong avenged a loss earlier in the day to Raukura Gladiators in their final to walk away victors (21-13) in the Senior Mixed.

Marshmallow Rats finished with a flawless 5-0 record after edging out MAH in the Junior Girls’ big dance, while Da Braddas went one better with six wins and zero losses after pipping ‘Ballers’ 22-15 in the Junior Boys’ last game.

A few mini games also took place during the day, where Xande Marsters from Da Braddas finished first in the Rebel Sport Shoot-out and Youthtown Knockout, and Kendyl Nelson-Graham from Kati Strong came out on top for the Rebel Sport Dunk contest.

The Tour heads back up to State Highway 1 for its next stop, with Westlake Girl’s High School hosting the north Auckland leg.

The 3x3 version of the basketball is played on a half-court with plenty of action in shorter timeframes.

The sport will make its Olympic Games debut in Tokyo.