Stormy 48 hours for many parts of NZ 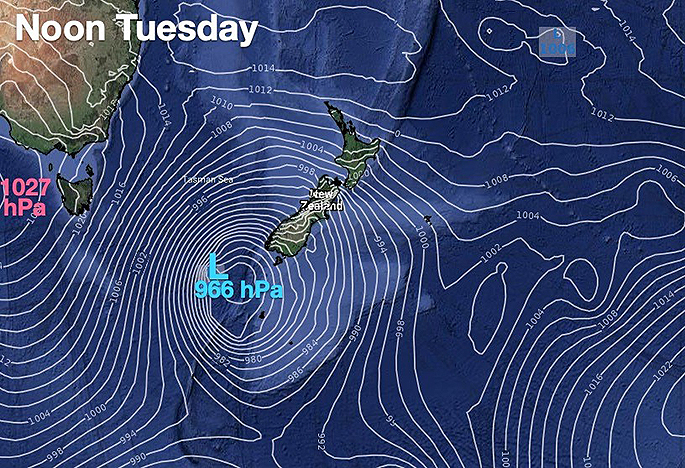 A big storm will skirt the southern coast of New Zealand over the next two days bringing a fairly mild but very windy surge into the country today, then a much colder than average southerly on Wednesday.

Those in the very north of the North Island and in a number of eastern areas will have windy weather at times, especially the further south you go, but for the most part rainfall totals are below normal, says WeatherWatch.co.nz

"From Auckland northwards the winds shouldn't be too serious although gales later today could prompt a couple of isolated power cuts.

"But it's the lower North Island and the lower South Island most impacted by this storm with severe, possibly damaging, gales developing and increasing today."

WeatherWatch says Wellington will have sustained gales later today with gusts to 120km/h in the city and gusts over 150km/h possible on the ranges.

"Through the Southern Alps similar winds are expected with a secondary surge of damaging gales closest to the low's centre, which will be near Fiordland today and is tracking eastwards past Stewart Island.

"On Wednesday another windy surge, this time a southerly. Again it will be most noticeable across the South Island and lower North Island, but for those camping in the north gusts up to gale force are possible as far north as Auckland and Coromandel Peninsula."

Dangerous beach conditions with waves of 7 to 10 metre are expected spread right up western NZ.

"Speaking of western areas, it will be the West Coast that has the highest rainfall totals with over 200mm possible in some places over the next few days.

"Higher up, this will fall as snow with unbelievable mid-summer snow totals of potentially over 1 metre on some of the mountain tops." 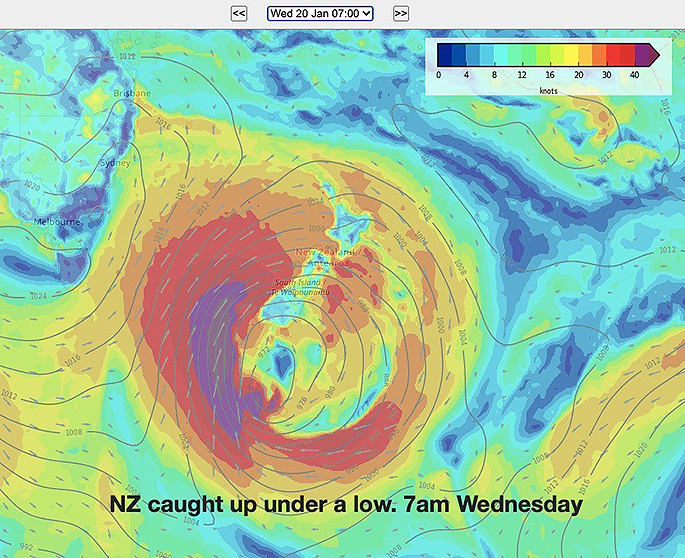 THE RAIN:
Rainfall totals will be highest on the West Coast with over 200mm possible in the next 5 days ahead. This is a fair amount but spread over a good number of days. Campers and trampers should not cross flooded streams.

Eastern and very northern NZ have low rainfall totals. The next 7 days actually lean drier than usual with the mountains and ranges blocking much of the rain from this storm to these areas. Northern NZ (Auckland northwards) is simply too far away from the centre of the storm to get much rain from it.

Further south and normally bone dry Central Otago may have another 20 to 50mm coming (higher totals to the west) with Southland receiving even higher totals.

SNOW
Most places won't get snow with it falling above 1000 to 1500 metres but the totals on the mountains are significant and over the next 3 days over a metre of snow may accumulate on some of the main peaks.

While snow in summer in NZ can occur from time to time, the totals are much higher than you'd normally expect.

THE GALES:
Tuesday has gale west to north west wind moving up the South Island and enhanced around Cook Strait and Wellington later today. Gales may even make it as far north as Auckland for a time (but damaging winds aren't as likely north of the lower North Island).

In the South Island gales hug Fiordland, through the Southern Alps and into the east to some degree.

THE COLD CHANGE:
Tuesday will have colder than average daytime highs through a chunk of the South Island but still a number in the east and north of both islands will lean warmer than normal.

This changes on Wednesday when a colder south to south west change spreads up the country making most places colder than normal - and again going into Thursday, although it does ease then and slightly milder weather starts to return.

DANGEROUS BEACHES:
The entire western side of New Zealand is a "NO GO" for being in the sea for the next few days as very dangerous conditions move in. The West Coast will be most impacted by waves as high as 10 metres. Very dangerous waves of up to 7 metres may impacted the western North Island.

Also Southland will be impacted by very dangerous beach conditions and seas offshore with waves over 10 metres at sea.

Eastern areas are calmer - but remember strong winds will be blowing out to sea so if on floatable devices that increases your chances of getting into trouble. If in doubt, please stay out.