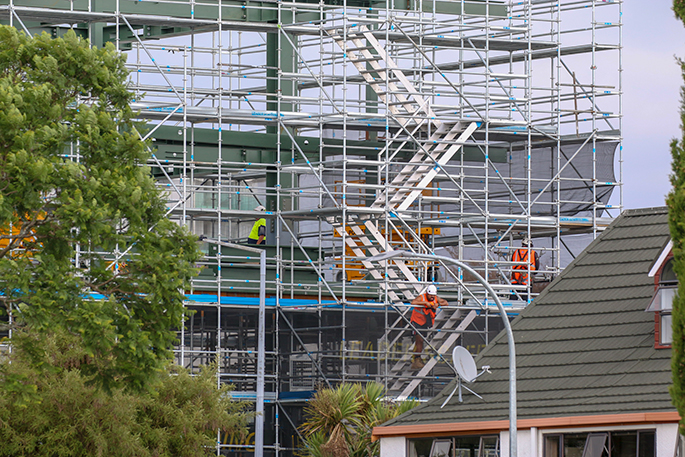 Electrical supplies are among the materials that are getting harder to obtain. File photo.

A shortage of building supplies is preventing the construction sector from delivering projects on time and within budget.

Plumbing, electrical and glass suppliers are reporting difficulties getting their hands on basic materials because supply lines had been stretched by the pandemic.

Active Electrical Suppliers general manager Kevin Pollock says he has been finding it progressively harder to bring products in since the middle of last year.

"The consequences of these delays means that the product installation by trades personnel is also delayed and in some instances alternative products are sourced but this requires additional time and resources to manage as well.

"So it becomes a more complex issue."

RNZ spoke to glass, tile, and heating and ventilation suppliers who were reporting similar delays.

Master Plumbers Association chief executive Greg Wallace says the challenges are the result of a unique set of circumstances combining to create a perfect storm.

"What happened is suppliers [when COVID-19 first emerged] predicted a downturn on the basis of all the banks and everyone else predicting a downturn and reduced some of their forward orders," Wallace says.

"Most of the plumbing items come from overseas and there's a lag of three to four months, so that's one issue."

That decision by suppliers has been compounded by an unexpected spike in home renovations as well as the severe congestion at the Ports of Auckland, Wallace says.

The country is not going to run out of supplies, but the delays are causing headaches for plumbers and gasfitters because if they had to change equipment half-way through a job, it means they will have to go back to the council to ensure there is compliance with the building code, he says.

To make matters worse, the supply of some products will fall when production in China slows down for Chinese New Year celebrations in February, Wallace says.

Construction industry expert and partner at business advisory firm BDO, James MacQueen, says it's the construction firms which could end up paying for the delays.

If there are hold-ups with work such as plumbing - which is one of the first things to go into a project - it will delay all the other work that followed, he says.

"If it's not planned correctly, it can be a significant issue because most building projects have a very clear timeline and then often, particularly the larger firms, there's liquidated damages if a building is not finished on time."

Liquidated damages are a financial penalty construction firms receive for each day a project is delayed.

MacQueen says there is a long-term risk the ongoing delays could see some firms fall over, in particular those which had a number of projects on the go facing similar challenges.

All the suppliers RNZ spoke to expect the delays to continue to at the least the end of March.

Their advice to customers is to be patient and be flexible.