Brotherly love put to the test 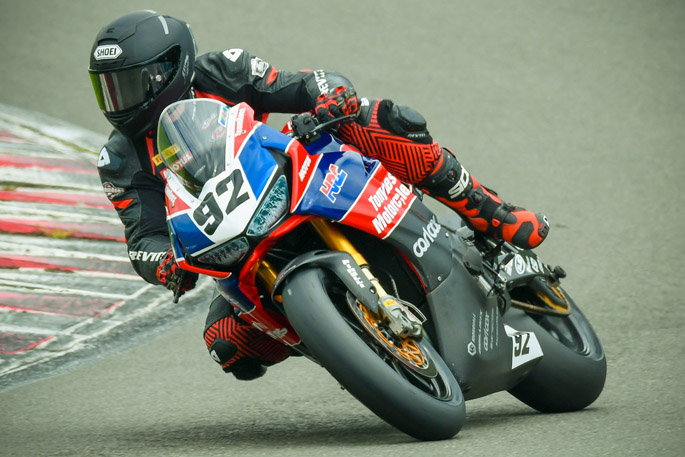 Whakatane's Damon Rees (Honda CBR1000), a dominant force in the premier Superbike class in Timaru at the weekend. Photo by Andy McGechan/BikesportNZ.com.

He may have been a last-minute entry and riding a borrowed bike, but none of that mattered to Whakatane's Damon Rees as he completed the South Island phase of the New Zealand Superbike Championships in winning style at the weekend.

For the second week in a row, there were multiple reasons to celebrate for the Team Rees Honda Racing crew as 25-year-old Rees and his elder brother Mitch Rees packed up at the conclusion of racing at Levels International Raceway, near Timaru, on Sunday with the two Honda riders positioned 1-2 at the top of the premier superbike class rankings.

The champagne corks had also been popping after the first of four rounds of the series at Ruapuna, on the outskirts of Christchurch, the previous weekend when the 28-year-old Mitch had finished the two days sitting pretty on top of the championship table, nine points ahead of Rangiora's Jake Lewis and 10.5 points ahead of third-ranked Damon.

But nobody had answer for Damon at round two at Levels at the weekend as he qualified his bright red Honda CBR1000 fastest on Saturday and then proceeded to score a hat-trick of race wins over the two days of intense action, lifting himself from third to first in the series standings.

Damon had not initially intended to be racing the domestic series at home this summer, his British Superbike Championship (BSB) team expecting his imminent arrival in the UK ahead of the start of that competition.

But notice from British Prime Minister Boris Johnson of a nationwide lockdown in the UK due to surging COVID-19 pandemic infections put sport on hold in the UK and gave the younger of the two Rees brothers the option to reconsider his plans.

It's highly likely now that Damon will be able to contest all four rounds of the domestic series in New Zealand – he won five of the first six races in the NZSBK last season before heading off-shore to tackle the BSB and that meant he denied himself a chance to add the 2020 Kiwi superbike crown to the 600cc title he won in 2017.

"It's been a perfect weekend for me – a pole position and three wins – I've not done that for a while.

"We'll have some new bikes for the North Island races and we'll do a lot of testing before those events. It's just so good to be racing here at home when there's nothing happening on the other side of the world and this is the best preparation for me for when I do head across to do the British championships."

Mitch compiled a 4-2-3 score-card at Levels, adding to the 2-2-3 tally he achieved at Ruapuna, proving that consistency counts for so much.

"The bike has been good for me ... actually both the Hondas have been good, obviously," says Mitch.  "I've obviously got to stop making mistakes. I ran off at the hairpin in race two (at Levels) and that cost me 10 seconds or so in that one. I've just got to make myself better.

"As soon as you start to get tired, your brain sort of goes, but the gap ahead of me was nothing, so I just pushed and pushed each time to earn another podium.”

Lewis, Christchurch's Alastair Hoogenboezem (Yamaha) and Taupo's Scott Moir (Suzuki) round out the top five in this elite class after Levels.

Regardless of how his NZSBK campaign pans out, Mitch has already had a glorious summer, having won the Formula One/Superbike class overall at the pre-nationals Suzuki International Series in December.

Meanwhile, the junior member of Team Rees Honda Racing, Taupiri's Zak Fuller, was also smiling at the weekend as he achieved three podium finishes in the hotly-contested Supersport 600 class. He is fourth overall in the class standings, despite crashing out of one of his races at Ruapuna.

Christchurch's Dale Finch as so far been unbeaten in the class, winning all the Supersport 600 races at Ruapuna and Levels, and Upper Hutt's Rogan Chandler is safely second overall after two rounds, but fourth-ranked Fuller is a novice in the class and is rightly encouraged by the form he has been exhibiting against his vastly-experienced rivals.

"I'm getting better and better," says Fuller. "It was good to latch onto Rogan (Chandler) and keep him honest. I'm absolutely stoked to be on the podium."

There is now a month-long break after this South Island phase of the series, with racing set to resume in the North Island, with the Mike Pero-sponsored MotoFest, round three at Hampton Downs Motorsport Park, near Meremere, on March 6-7, before wrapping up with round four at Taupo's Bruce McLaren Motorsport Park on March 13-14.