It‘s a slippery slope to the top for native fish 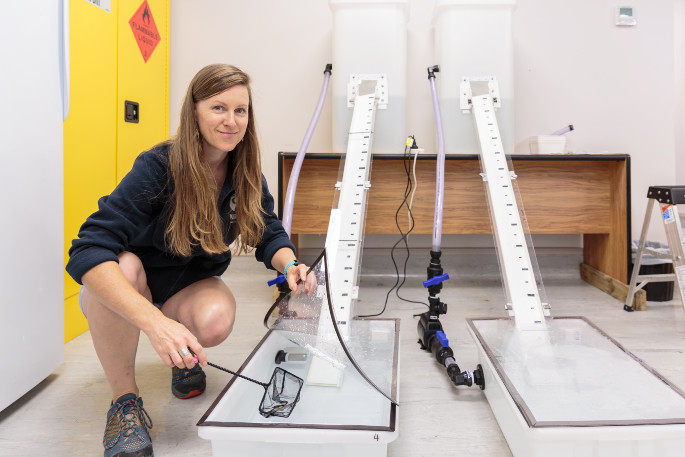 New Zealand’s native fish are doing their best to climb up ramps in a NIWA laboratory so scientists can learn how to better help them navigate our tricky waterways.

Hamilton-based hydroecologist Dr Eleanor Gee and her team have rigged up six ramps - each at different angles and sporting two different surface types - one smooth, the other textured - to test how adept the fish are at making their way to the top. The idea is to simulate their upstream migration.

Eleanor is using young fish of the whitebait species kōaro and banded kōkopu at the moment and plans to move on to redfin bullies.

"These species are known to be climbers and all migrate as part of their lifecycle."

Kōaro in particular are known to be excellent climbers and able to penetrate further inland than other whitebait species after spending their larval life in the sea. 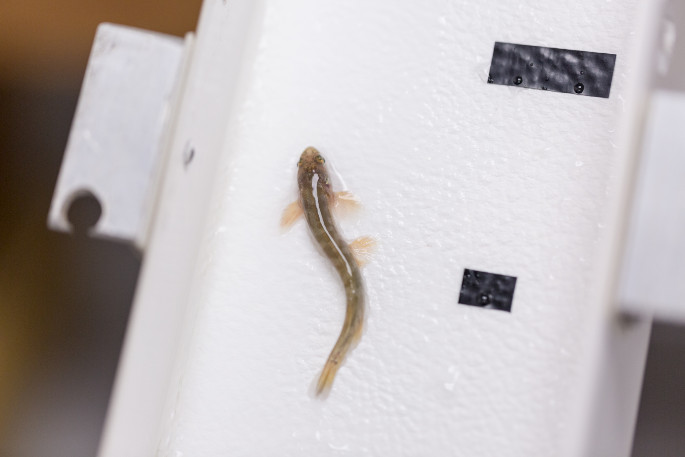 A banded kōkopu makes its way up a slippery slope during a NIWA experiment. Photo: Chloe Ramsey

Migrating native fish face a range of issues in our waterways, including manmade barriers such as dams, weirs and culverts that prevent them reaching their preferred freshwater habitats.

"What we’re trying to do is find out the limits of the known climbing fish by testing them on ramps of varying steepness. Ultimately, we’d like to look at whether larger or older fish find it more difficult. We know some small fish can climb near vertical slopes, but they probably can’t do that their entire lives so we want to find out at what stage they stop,” says Eleanor.

She says the ability to climb is not a particularly common strategy for fish but it allows the fish to migrate further upstream than other species they may compete with. However, more than one-third of New Zealand’s native freshwater fish migrate from the sea upstream, and that includes a number of species in decline.

"The shortjaw kōkopu is a nationally threatened species and is also a climber, so it’s important to find as much as possible about climbing so we can manage them in the best possible way."

Interestingly, not all climbing fish climb in the same way. Kōaro and banded kōkopu use an alternating limb movement, like swimming freestyle, while bullies go for a bilateral movement which is more like breast-stroke, moving both limbs in the same direction at the same time.

"It’s pretty impressive watching them shuffle their way up these structures."

They can also climb a long way with some known to surmount significant waterfalls depending on the steepness and the type of substrate available. 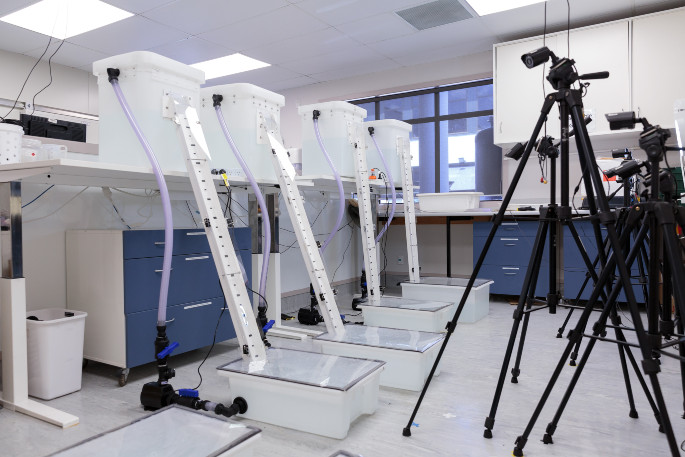 The fish ramps set up in a Hamilton laboratory for trials that aim to help native fish better negotiate waterways. Photo: Chloe Ramsey

The insight Dr Gee gains from the experiments will be used to update the New Zealand Fish Passage Guidelines first introduced in 2018. The guidelines set out the recommended practice for designing infrastructure in streams that enable fish to pass through and were developed to help waterway managers, engineers, environmental officers, iwi and communities understand and implement better management of fish passage in New Zealand.

New freshwater management rules require all regional councils to identify barriers to fish passage and come up with a plan for mitigating them.

So far the experiment is providing plenty of challenges for the 100 or so fish roped in to help.

"I’ve seen a kōaro get up reasonably quickly and then experience a slippery ride to the bottom, and I’ve had a few naughty children who have decided to climb off the ramp, but it is a really fun experiment to do."

"For me personally a lot of what drives me professionally is the contribution I can make to the public knowledge and understanding of these species. People care a lot about these treasured animals."