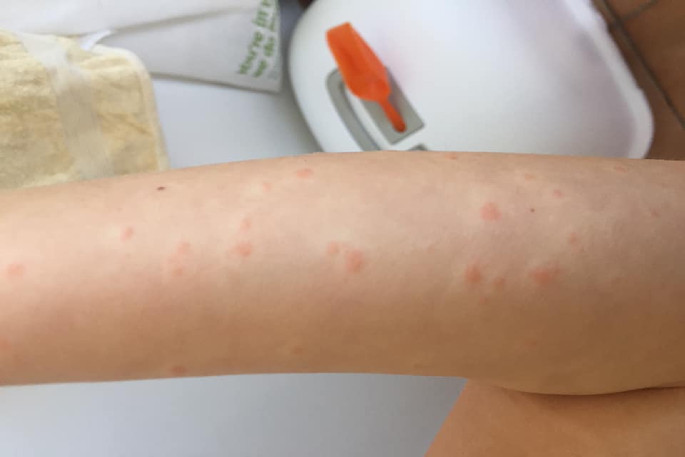 Bites from what was believed to be the ‘Mount Mauler’.

Several beachgoers are complaining about itchy rashes after swimming at Papamoa Beach over the last few days.

A Facebook Post, with currently more than 80 comments, has many complaining of what they believe to be either sea lice, jellyfish larvae or even the Mount Mauler.

Catherine Lashbrooke says the bites have put her off for good.

“I have hundreds of the red dots on my torso etc. It’s incredibly itchy and uncomfortable!!!! It’s sea lice- tiny jellyfish larva. The stings are enough to make me never swim again - seriously unpleasant!!!!”

“My son has it from the weekend. But he thinks it was sea lice as he wasn’t in the sand. He was life guarding.”

Brydie Henry agrees saying “My son was swimming near Omanu and has similar bites that are super itchy mainly in tog covered areas so we think it’s sea lice not the Mount Mauler this time ...”

While others who were training in the sea also got bitten.

“Sea lice, my daughter had them on Mon/Tues and she was training in the sea” says Stephanie Mardon.

Shannon Verwey agrees saying “Yes my son and sister got these 2 days ago swimming too. They both had them pop up yesterday and today though - all in the tog areas only.”

Surfers were also not in the clear.

“My son has been at Tay Street surfing last week and has the same thing, in his togs area, I’m guessing sea lice as he doesn’t sit on the sand at all” says Tracey Robertson.

Another beachgoer Kristin Sullivan believes they are jellyfish larvae.

“My son got absolutely annihilated by Jelly Fish larvae at the domain a couple of days ago. He did not sit on the sand at all, just went swimming. He has been absolutely miserable.

“I think they larvae must get stuck inside swimwear and go nuts.”

According to Healthline, sea lice is ‘a skin irritation due to the trapping of small jellyfish larvae underneath bathing suits in the ocean. Pressure on the larvae causes them to release inflammatory, stinging cells that cause itching, irritation, and red bumps on the skin.’

Sea lice have no relation to the lice that cause head lice, and mainly occur in the warm summer months.

The rash usually last about two to four days.

Healthline advises to change your swimsuit quickly after getting out of the water and to avoid rubbing a towel against your skin.

Both the wife and i got hammered at tuapiro pt our legs were covered with bites.we never sat in the sand just wading in the water . Derm-aid from the chemist was our savour from the itch . Was a rough couple of weeks that is for sure