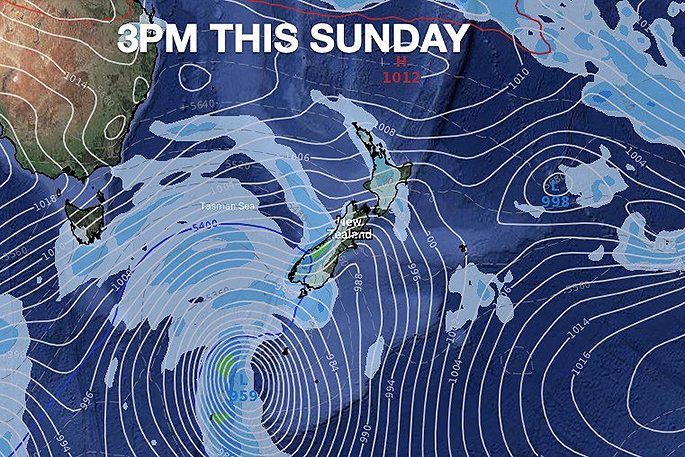 The weather map for around 3pm on Sunday. Images: WeatherWatch.co.nz

New Zealand is now in the peak La Nina phase but as WeatherWatch forecast last year, it's not having a major impact on NZ's weather.

"While we have some seen pockets of flooding, from Bluff Hill in Napier to parts of Otago, most places in between have not had overly active wet (or hot) weather," says a statement from the weather organisation.

"As we forecast last year the Southern Ocean is more active this summer and is helping cancel out an only moderately strong, short lived, La Nina for the New Zealand area."

So instead of easterlies (typical with La Nina), New Zealand now has an increase in windy westerlies and Southern Ocean lows.

"This Sunday will be the first taste of the Southern Ocean weather with a burst of windier westerlies moving up NZ (gale in some places) and western rain and showers.

"Next week, a much larger area of low pressure moves in south of NZ and this will drive in more rain to the West Coast and a temperature drop by mid next week with highs in some parts of Southland and Otago possibly as low as 11 or 12 degrees."

WeatherWatch says theere may also be a dusting of snow on the tops of the Southern Alps. 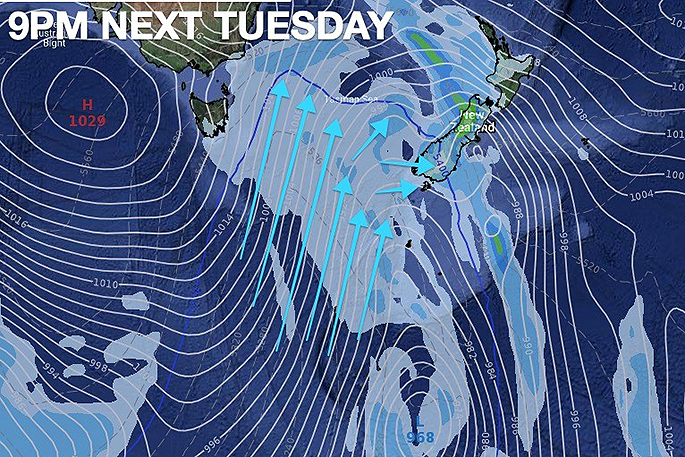 The weather map for around 4pm next Tuesday.