Incredible elite fields for Tauranga Half 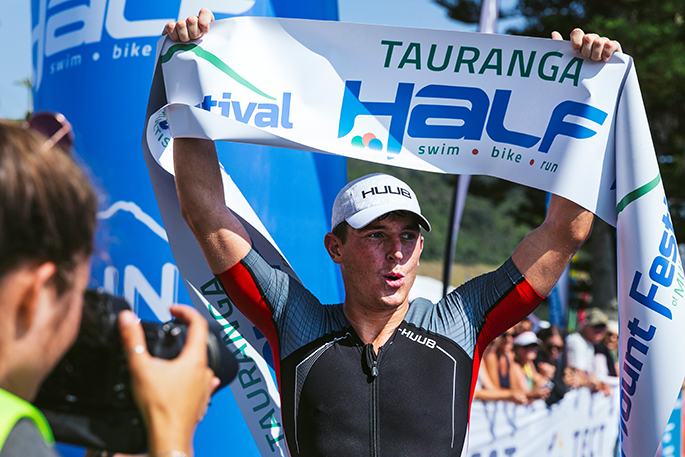 This year’s Tauranga Half brings together an incredible field of multisport athletes, with several past winners and former world champions set to be on start line at Mount Maunganui’s Pilot Bay.

After the event, Smith acknowledged the man whose course record he had just broken saying “Braden Currie is such a classy athlete, who has paved the way for athletes such as myself to follow.  I hope he returns to the race next year”.

Smith will get his wish in just over a week’s time with legendary multisport athlete, Braden Currie back at the Tauranga Half for the first time in four years.

Another contender with an incredible record is Terenzo Bozzone.

He has won multiple world titles including the Ironman 70.3 World Championships, and Ironman NZ in 2018, in a course record time.

Another strong contender is 2019 race winner Mike Phillips, who went on to win Ironman NZ that year.

Throw into the mix last year’s runner-up Jack Moody, ten time event winner Cameron Brown, and Simon Cochrane who has finished 4th for the past four years, and you have an incredible elite field.

Tauranga athlete Hannah Wells will have plenty of home town support as she aims for a three peat of victories in the event.

She dedicated herself full time to the sport in 2020, after splitting her time in recent years between triathlon and her work as a medical researcher in the field of biotech engineering.

Wells had an unbeaten year in 2019, winning all nine events that she competed in, and continued this good form in 2020 winning the Tauranga Half, Ironman 70.3 in Geelong and Rotorua Suffer in December, smashing the course record by 21 minutes.

Not far behind her in Rotorua was Teresa Adam, one of the world’s best athletes at the full Ironman distance.

She won Ironman NZ in 2020 in course record time, and is a two-time winner of the Asia Pacific Champs.

Last year’s runner-up Rebecca Clark is another strong contender for the Tauranga Half title, while the likes of Melanie Burke and Emily McNaughton should feature prominently.

General Manager of the Fulton Hogan Mount Festival Lauren Watson says that the elite field for the 2021 Tauranga Half is “the strongest it has been in over a decade".

"It is shaping as an absolute showdown on the 23rd of the January.”

Also on the Fulton Hogan Mount Festival programme is the longer Enduro event, while for athletes keen to avoid running there is the increasingly popular Aquabike event. The Mount Run has distances for runners of all abilities with 5km, 10km and half marathon (21.1km) options.

The start-line for all events is Mount Maunganui’s picturesque Pilot Bay.  The festival is an iconic one for the triathlon and Bay of Plenty community, with crowds lining the café filled streets of Mt Maunganui to cheer on the athletes.

Athletes wanting to challenge themselves with an athletic endeavor, final entries can be made at www.mountfestival.kiwi