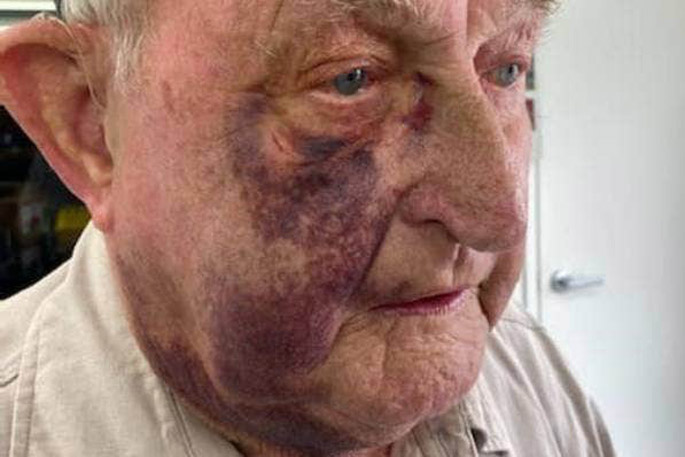 Norm Russell was the victim of a road rage incident in Ōtaki in December, 2020. Photo: Supplied.

Norm Russell was a hard worker.

And at 81-years-old he had shown no signs of slowing down, with son Darrell saying Norm worked for him for about 18 years at the Piako Group and had done so right up until the day he died.

Norm died suddenly on Saturday after suffering a medical event while mowing the lawns at his Morrinsville home.

Darrell says his dad shouldn’t have been out mowing the lawns, but “dad being dad [he] had to get them done before we got home”.

Norm was due to celebrate his 82nd Birthday in May, but had struggled since a brutal road-rage incident in December where he was allegedly hit in the face.

He had bled from the nose and mouth for about two hours, where his dentures had cut his gum, and at the time said he was still “black and blue” a week after the incident, which he described as “cruel”.

A man has now been charged with common assault and Darrell says the incident had really affected his father.

”He couldn’t let it go, and he was very, very wound up about it."

After the alleged assault, Norm could not really see in that eye and Darrell says his dad had been left acting more urgent and anxious than previously.

Carting stock for most of the farmers in the region, Darrell says his dad had a reputation for treating animals well, so was well liked.

He was “infectious” and someone who just embraced people.

Darrell recalled his delivering coal in the early days.

“[They would put] big bags of coal on their back and you would get there and Mrs Smith would want you to shift the whole thing.”

At the time of Norm's death his family were in Whangamata commemorating the six-year anniversary of the death of Darrell and Catherine’s daughter, Amie.

The 15-year-old died in a paddle-boarding accident on January 7, 2015 after she was knocked off a stand-up paddle board and sucked beneath the water beside a boat.

Her leg rope became tangled on the keel of a yacht, holding her underwater, despite efforts from others nearby to save her.

Coroner Gordon Matenga recommended quick-release leashes for paddleboarders in white water, rivers and water with strong currents after her death.

When Amie died it broke Norm’s heart like everyone else, Darrell says.

Darrell’s mum, Kathleen, died in 2013 and Norm had been with his partner Marie for the past six-years.

The family were well known in the region but Norm's biggest sense of pride seemed to come from his son.

In a semi-biography that Darrell’s sons made for Norm’s 80th birthday, the foreward by Norm said "if I can claim one notable success it was the raising, with Kathleen of course, a son of whom I could not be more proud of”.

"Not only proud of his business success and creating his own wonderful family, but proud of the fact he is a good man in every sense of the word".

Darrell says his sons interviewed Norm for the book and put it together, which he was grateful for now.

In Norm’s death notice he was described as a loved father of Darrell and Catherine, a cherished grandad of Hayden, Liam and the late Amie, a close brother of Dawn and a loved partner and best friend of Marie.

He will be farewelled on Saturday at the Morrinsville Events Centre from 11am.

A 24-year-old man is expected to appear in Levin District Court on January 28 on a charge of common assault.

..is never an answer (unless your life or the lives of your family are at stake.) Assaulting an elderly person because you are annoyed at their driving, is never going to be OK. If you can’t control your temper, don’t drive. If you feel yourself getting angry behind the wheel, pull over, take five and some deep breaths until you are back in control. If you can’t control yourself you certainly can’t control a car. The penalties for road rage should be severe enough to make people think twice.