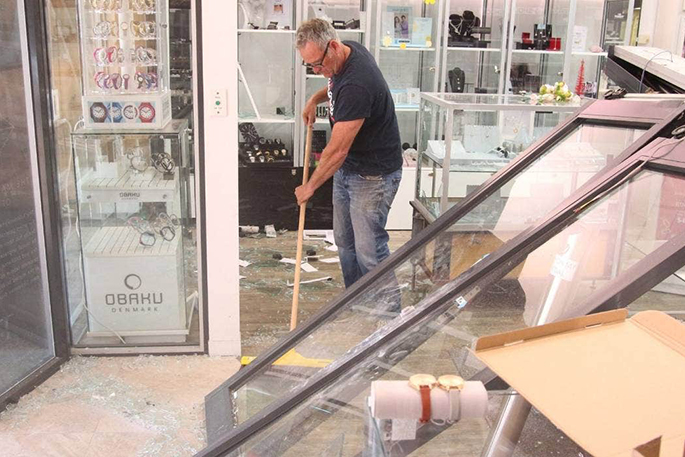 Cambridge Jewellers owners Andrew and Katrina Haultain were left with a massive clean-up job when their store was ram raided, on December 30. Photo: Lawrence Gullery/Stuff.

A youth has been arrested in connection to a burglary at a Cambridge jeweller.

Police say officers are following strong lines of enquiry to locate other offenders.

On December 30, four offenders used two stolen cars in the aggravated burglary at the jeweller on Victoria Street in Cambridge, causing $100,000 in damage, says a police spokesperson.

The offenders used weapons to smash into the display cabinets, taking a significant amount of jewellery including Swarovski, Karen Walker and Nomination items along with high end G-shock and Nixon watches.

The store was equipped with CCTV cameras and fog cannons were activated. The offenders then fled in a stolen car, which was located abandoned in Hamilton.

Sergeant Ben Joll says a youth was arrested in Palmerston North on Monday.

He is facing multiple charges including burglary and will appear in the Youth Court at a later date.

Sergeant Joll says this crime has had a huge impact on the owners of the store who were planning to take a short break over the New Year but have been left to make significant repairs, causing disruption to their business during a busy trading period.

Anyone with information, or who may have seen jewellery of this description offered for sale, is asked to contact Police via 105 quoting reference 201230/0347.

Desperate actions from the not very intelligent. GRRRR...

this should not be a youth court case no matter how young the youth is.his punishment there wont deter him..no more wet bus ticket eh.

HAHAHA. May as well give home a chocolate bar and cookie to go with his wet bus ticket.