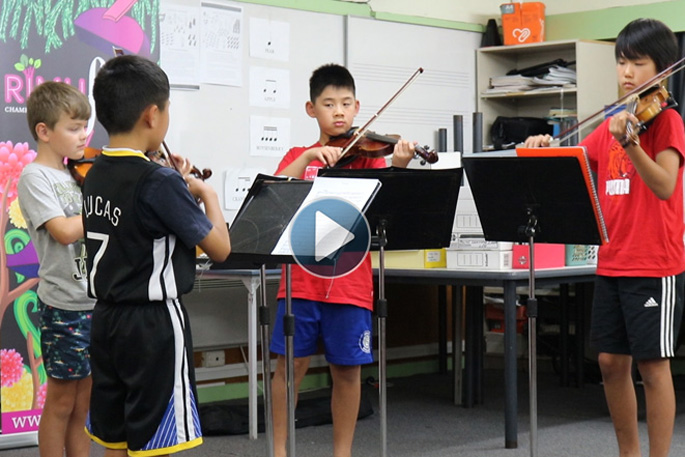 New Zealand’s only chamber music festival for children, Rimufest, has returned to Tauranga for the second year.

The festival happens twice a year in Tauranga and Veracruz, Mexico.

The number of students has doubled since last year, with 49 students attending the programme.

“It's been incredibly rewarding to see the students and programme progress over the last 12 months while also receiving such warm and encouraging support from the local community.”

Elyse says Rimufest is a great way for the children to learn extra life skills.

“Chamber music is a vehicle for learning important life skills- leadership, communication, team building, there’s so many life skills these students are learning while also having an awesome time sharing music.”

Rimufest participant Emilia Yip, 12, says she loves Rimufest as she gets to experience difference things and create strong friendships, while Lucas Wang, 10, says he likes getting to perform individually.

“It’s not like an orchestra where [the instruments] play the same thing, we all play different things.”

His group, Team Lads, performed the ‘Concerto for Four Violins’ by Georg Telemann.

Rimufest is designed for children aged seven to 15, and is currently New Zealand’s only chamber music festival for children.

After the inaugural January festival, they launched two holiday programmes in terms 2 and 3. Since then, they were awarded a Creative New Zealand Creative Communities Scheme grant for their efforts in the Bay of Plenty.

The week-long festival was started by husband and wife Alejandro Larumbe and Amelia Taylor, who met in Louisiana. They join Elyse Dalabakis and Hannah Neman to complete the Harikoa Collective who are currently the ensemble in residence at The Jam Factory.

The final concert for Rimufest was on Saturday at the Jam Factory.