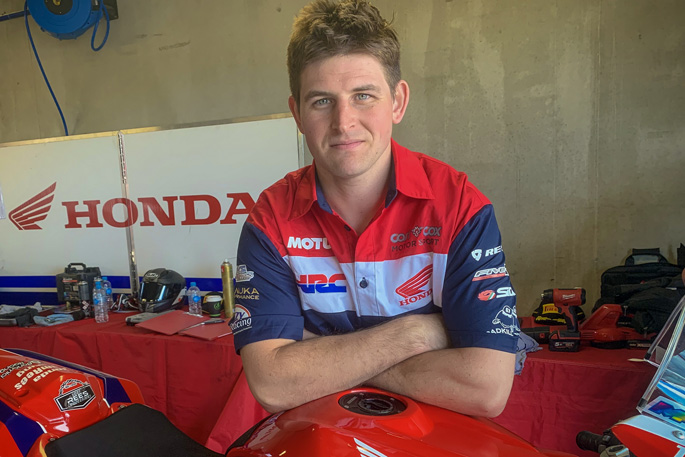 It was double celebration time for Team Rees Honda Racing at the weekend as sibling rivals Mitch and Damon Rees both shone out at the opening round of the motorcycle road-racing nationals.

The four-round 2021 New Zealand Superbike Championships were launched at Mike Pero Motorsport Park, Ruapuna, on the outskirts of Christchurch at the weekend and it was the equally-talented Whakatane brothers stealing most of the limelight on their bright red Honda machines.

What was perhaps most remarkable was the fact that 25-year-old Damon Rees had not initially intended to be racing the domestic series at home this summer, his British Superbike Championship team expecting his imminent arrival in the UK ahead of the start of that competition.

But notice from British Prime Minister Boris Johnson of a nationwide lockdown in the UK due to surging COVID-19 pandemic infections, gave the younger of the two Rees brothers pause for thought.

"I originally was not going to race (in New Zealand), as I need to save as much as I can for the coming season in the Bennett's British Superbike Championship (BSB). I'm meant to return to the UK in late February. Due to the uncertainty of when I’ll be able to return to the UK to test bikes, I think it’s best for me to get as much bike time as I can here in New Zealand so that I'm well prepared for BSB."

So a last-minute decision was made for him to race in Christchurch and he'd take the spare bike belonging to his 28-year-old brother Mitch Rees, an older 2017-model model Honda CBR1000, into battle here after all.

And Damon Rees wasted no time at the weekend, winning two of those three races and also claiming the coveted NZ Grand Prix title trophy for a second consecutive season. A minor electrical glitch forced him to drop out of the other Superbike race.

So it was the consistency of his brother Mitch that ensured it is he who leads the race for the national crown.

Mitch Rees produced a solid performance over both days – compiling a 2-2-3 score-card in his three races – and he leads the series by nine points from Rangiora's Jake Lewis, with Damon Rees settling for third overall after this opening round, just 1.5 points adrift of Lewis.

"The borrowed bike was perfect, apart from the electrical fault we discovered, and I'm very happy with my weekend," says Damon.

"At this stage it's unlikely I'll back in England until the end of March or beginning of April and that's the reason that I'm racing here. I'll race and contend for the title now if I can. I believe I may still be here until after this New Zealand series is completed (on March 13-14).

"I'm looking forward to racing at round two at Levels International Raceway (near Timaru) next weekend. I love racing there. I won all three races there last year and hopefully I can go there and do it again."

For Mitch Rees, the weekend could not have gone much better and he's thrilled to be leading the championship for the first time in his career.

"I'm happy with my riding. I wasn't the fastest but I had solid results and that's always been my plan. Last year here at Christchurch was an absolute disaster for me. I finished only one of the three races and scored only nine points last year, but this year I'm leading the series," says Mitch.

Perhaps none of this should come as a surprise – Mitch Rees won the Formula One/Superbike class overall at the pre-nationals Suzuki International Series in December.