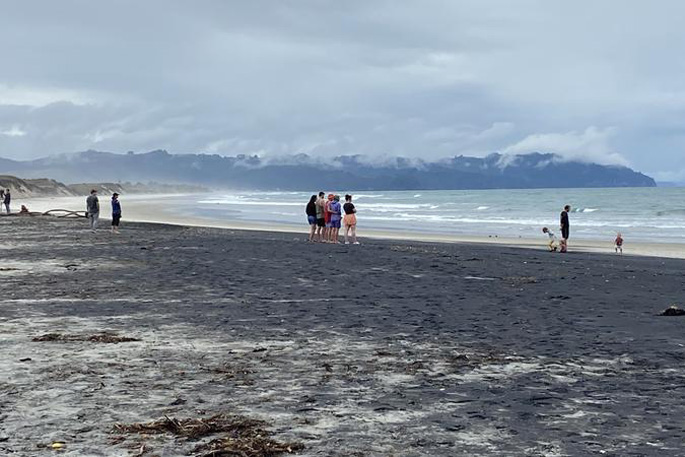 The nation's surf rescue boss says increased shark sightings mustn't lead to panic in the wake of the death of a woman at Waihī Beach last week.

The teenager's death after a shark attack coincided with an rise in shark sightings so far this summer.

Hamilton woman Kaelah Marlow, 19, was dragged from the water at Bowentown Beach in the Bay of Plenty last Friday, where she died from her injuries.

Pauanui Beach in the Coromandel, 70km north of the attack, closed for a period on both Saturday and Sunday, after reports of shark sightings.

"We are seeing more sharks than probably what we would normally see," he says.

"But if we have a look at what is actually happening on the beach, we've got clear water at the moment, there hasn't been a really big swell, so the visibility in the water is really good and we are seeing a lot more people down on the beach, walking and swimming, because of the Covid effect."

The fact sharks were being spotted along the coast shouldn't cause alarm as the predators - mostly bronze whalers and thresher sharks, according to lifeguard reports - were simply cruising and not feeding, he says.

"They're pretty much doing what we would be doing, enjoying the warm water, basking and cruising. There's not any real food source along the surf beaches.

"These sharks feed out to sea or in the harbours where there's lots and lots of food... If they're hunting, they are in stealth mode."

He says if a shark was sighted while swimming the most important thing to do was not panic, but to get calmly out of the water and alert others in the general vicinity.

"Look to where your whānau is, gathering them. If you feel uncomfortable, make your way back to shore at best pace, but don't panic by any means. What that will do is, you're more likely to lose members of your family out the back, or get disorientated."

He says beachgoers should share the information with those close by, but they shouldn't go around clearing the entire beach.

"Take a note of the direction of the shark and you might want to inform those down stream more, but again, don't panic."

Department of Conservation marine scientist Clinton Duffy says people should exercise caution by always swimming between the flags, never swim alone at a non-patrolled beach and avoid swimming at night, and where people are or have been fishing.

Allan says it had been a quiet summer in general for lifeguards so far, with calm conditions and very little surf.

"We're getting massive crowds and people are sticking between the flags, so I think we're getting a combination of public support - helping us to help them - and calm conditions, and that's why we haven't seen a massive number of rescues."

"We're getting massive crowds and people are sticking between the flags, so I think we're getting a combination of public support - helping us to help them - and calm conditions, and that's why we haven't seen a massive number of rescues."

. . . and yet you still drive a car where you are at a hundred times more risk. As for the sharks, as you say it’s their domain we’re entering.

... is pretty easy really: Don’t go in the ocean. You are pitting yourself against an end product of evolution that has been around that environment for an estimated 400,000,000 years; (200,000,000 BEFORE the dinosaurs!) It is perfectly adapted to be there; we are not. I know you love the water (so do I) but unless there is more pro-active protection on popular beaches (patrols, drones, and similar) the risk, in my opinion, is too high. Perhaps, in a large group, in comparatively shallow water, that risk is mitigated, but it can’t be removed (don’t forget stingrays and jellyfish...) and if you have kids you may still find it unacceptable. I think we need shark detection mechanisms (drones could be good) that would provide at least some measure of security before entering their domain.