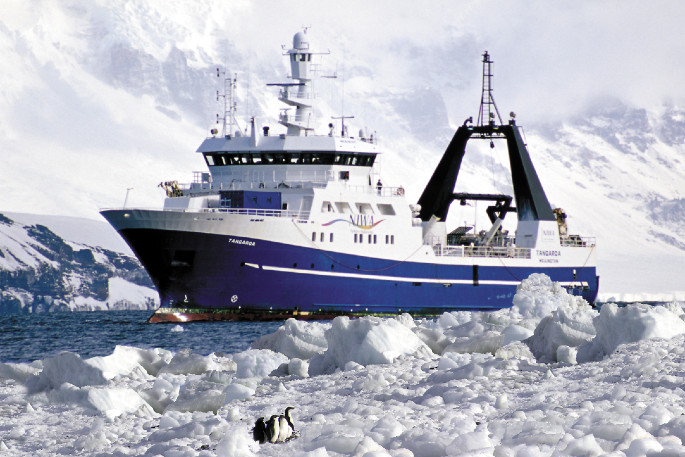 NIWA’s flagship research vessel Tangaroa left yesterday on a six-week voyage to Antarctica, making it one of the few full scientific expeditions to the continent since the global outbreak of COVID-19.

The ship left Wellington with 20 science staff and 19 crew on board on Friday afternoon to learn more about key environmental and biological processes in the Ross Sea.

Voyage leader and fisheries scientist Dr Richard O’Driscoll says this is the third in a series of voyages focused on providing baseline information about the Ross Sea Marine Protected Area  - MPA - established in 2017.

"This year we are focused on understanding the key processes that drive the environment and oceanography of the region and assessing the potential impacts of climate change,” says Richard.

"Antarctica is important because some of the processes that happen there have impacts for the whole planet."

Scientists have a range of programmes looking at everything from phytoplankton - microscopic marine algae at the base of food webs - through to water chemistry and oceanography, sampling of fish and finding out more about the distribution of whales.

"Some previous voyages had a single focus - this one is a lot more multi-disciplinary and is all tied in with the concept of long-term monitoring," says Richard.

NIWA Principal Scientist Dr Matt Pinkerton leads a five-year project called RossRAMP, funded by MBIE, which is studying the effectiveness of the Ross Sea MPA. After five years Matt will submit a report to the international body CCAMLR - Commission for the Conservation of Antarctic Marine Living Resources -  and a formal assessment of the MPA’s effectiveness will be made after ten years.

"We are trying to understand what is there now and looking at particular threats to the ecosystem from fishing and climate change,” says Matt.

Matt says on this voyage scientists have nine objectives they hope to complete which includes taking bio-optical measurements to understand the colour of phytoplankton which are microscopic marine algae at the base of food webs.

"Learning more about the optical properties of phytoplankton means we can then improve satellite monitoring because that’s one of our best ways of getting a handle on what long term changes are happening in the area."

The Antarctic Science Platform is also funding part of the voyage and will look at physical oceanography and phytoplankton, including how iron is used by plankton.

"Their growth depends a lot on the amount of iron in the water. One of the key things limiting our ability to forecast changes in plankton will be if we don’t get a handle on the mechanisms for iron," says Matt.

Weather and sea ice permitting, Tangaroa will also retrieve and redeploy several moorings which have been in place for two years. Among those are three acoustic sensors which have been recording the sounds of sperm whales.

Historically common on the Ross Sea Slope, the aim is to find out where their populations are concentrated, how they interact and where they go.

"We know they eat a lot of toothfish so we want to see where they are and whether they’ve been affected by the toothfish fishery."

The voyage was originally intended to be an international collaboration but COVID-19 has meant overseas scientists have been unable to travel. All those on the voyage have been tested for COVID-19 ahead of departure as part of an international effort to keep Antarctica virus-free.

NIWA has also purchased a COVID testing machine that will be used on board if anyone displays symptoms.

This is the 14th Antarctic voyage for Tangaroa and Dr Richard O’Driscoll’s fourth. He is particularly looking forward to studies of the animals living on the seafloor around the coastal zones.

"We are not always close to the coast so scientifically it will be interesting as well as providing for great views. We will be looking at what’s there between 30m and 200m depths where we don’t have a lot of information so there’s the discovery aspect of it too,” says Richard.

Richard says anyone who has been to Antarctica knows it is an incredibly beautiful place that presents huge challenges in such a rugged and remote environment.

"It’s one of those experiences that is transformational. Any time you go to sea around New Zealand you see something different every day. But to do science work in an Antarctic environment is just stunning,” says Richard.

A specialised ice pilot will be on board to guide Tangaroa through the sea ice which is likely to change on a daily basis. The crew also includes a ship doctor.

Tangaroa returns to Wellington on February 17.