Surf’s up at Mount Beach 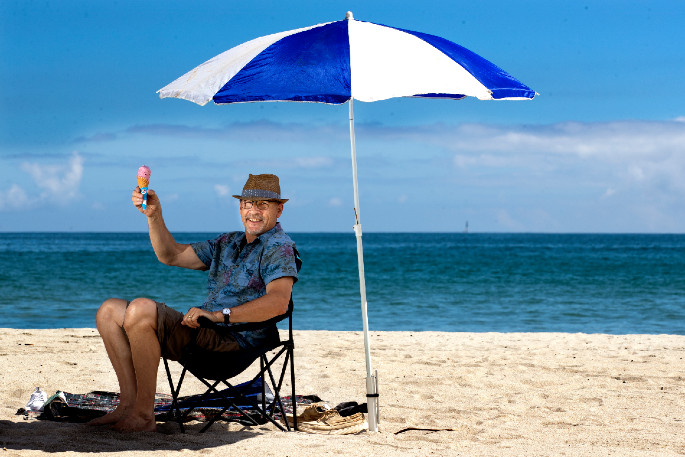 Luke McKenzie lapping up the sun, shade, sea and an ice cream at the Mount Main Beach. Photo: John Borren.

With temperatures this week in the high 20s, Mount Maunganui’s beaches have been packed with people cooling off in the surf and enjoying the cloudless days.

Mount Maunganui Lifeguard Service patrols the stretch of beach from Mauao to Tay Street and this year it is busier than ever.

Head lifeguard John Dugard says the high number of people on the beach is possibly because they can’t travel overseas.

“Kiwis are pretty good at moving around and traveling. So they're trying to get out and have some fun.”

One such Kiwi is nine-year-old Amelia Robinson who enjoyed catching some waves at the Mount Main Beach this week.

The lifeguards do hourly headcounts during patrol hours and on Wednesday at 1pm there were 1250 people on the Main Beach and 300 in the water.

Despite the high numbers the crew have only done a couple of minor rescues and given first aid to people with cuts, sprained ankles and minor injuries so far this season.

John expects there will be more rescues because ocean swells are increasing this week but says the season has been successful so far.

Despite the beaches being busier there has been a decline in visitor numbers of around 6000 people per day compared to last year according to Tourism Bay of Plenty data.

Between December 19 and 31, the Western Bay of Plenty had an average of 24,000 domestic visitors per day which is an 18 per cent decrease on the same period last year.

Tourism Bay of Plenty chief executive Kristin Dunne says the closed borders and lack of cruise industry has left a significant gap that tourism businesses are struggling to fill.

She says despite the challenges tourism operators are facing there has also been incredible innovation.

“The tourism businesses focussed on the domestic market, have already felt the impact of so many Kiwis getting out and exploring their backyard and remain optimistic about the future.”