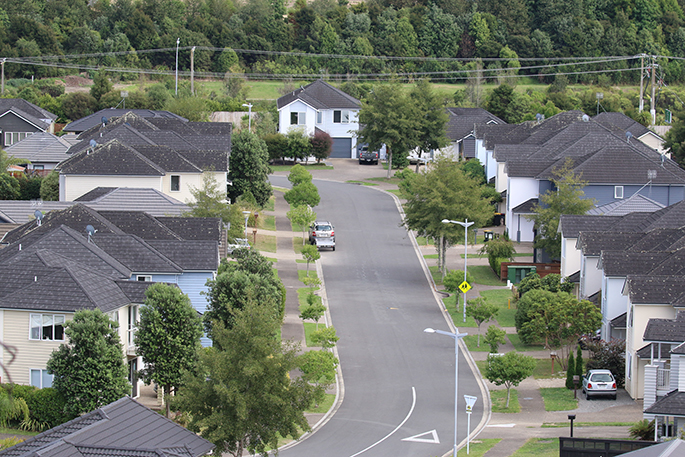 Real-time data from realestate.co.nz suggests that stock shortages will continue to pose challenges for Kiwi buyers at the start of 2021.

Housing stock was down year-on-year in almost every region in New Zealand during December, with 16 of 19 regions falling to all-time lows since records began 13 years ago. The national stock level was also at a record low.

Vanessa Taylor, spokesperson for realestate.co.nz, says this is despite a year-on-year 19.2 per cent increase in new listings coming onto the market during December.

“There were 29.1 per cent less homes available for sale at the end of last month compared to December 2019, creating a significant mismatch in supply and demand.”

“We’re still seeing a lot of competition in the market and I expect this will continue to drive strong prices in the first quarter of 2021, encouraged by low mortgage rates and a lack of international travel,” says Vanessa. 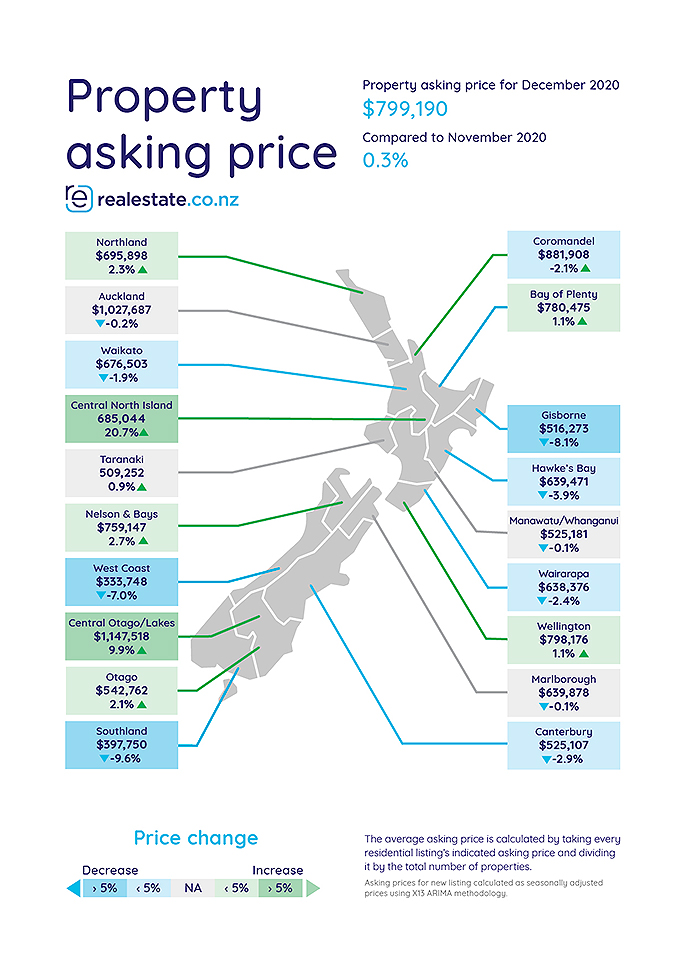 Average asking price up 13.6 per cent on last year, with record highs in two regions

Real-time data from realestate.co.nz shows the national average asking price remained stable month-on-month in December with a marginal 0.3 per cent increase on November 2020. However, this number increased by 13.6 per cent when compared to December 2019.

“Although this might be welcome news for sellers, it may not be time to celebrate just yet.”

“We saw a significant number of high-end and large lifestyle properties come onto the market in the Central North Island during December, which has pushed the average asking price up,” cautions Vanessa. 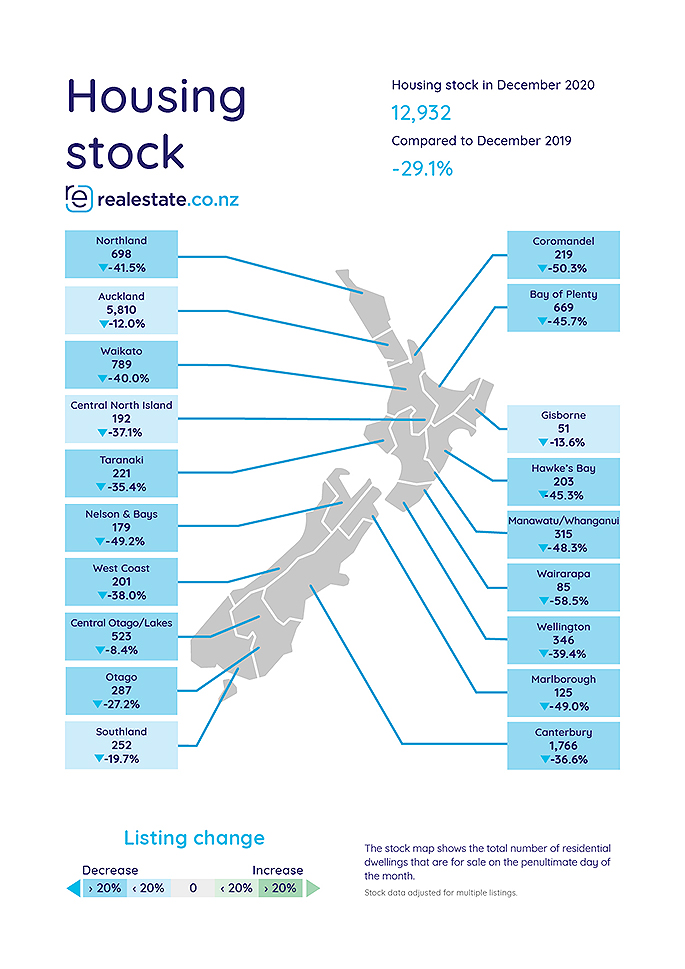 Stock shortage continues, with record lows nationally and in 16 regions

Property remains in short supply across the country with only 12,932 homes available for purchase in New Zealand at the end of December – 29.1 per cent less than the same time last year, a 13-year record low.

Housing stock was down year-on-year in almost every region last month, with 16 of 19 regions falling to record lows.

“The stock shortage will likely continue to prove challenging for buyers at the beginning of 2021,” says Vanessa.

“This is a long-term factor impacting the New Zealand market and the number of Kiwis returning from overseas, combined with low mortgage rates and lack of international travel, are only adding to the demand for property.”

New listings up – but regions still in short supply

“Although it’s promising to see pockets of new listings coming onto the market across the country, it was largely our major centres that did the heavy lifting last month,” says Vanessa.

Of the 6592 properties that came onto the market in December 2020, more than half were in Auckland, Wellington and Canterbury.

“Buyers in regional New Zealand are still faced with little choice at the moment,” says Vanessa.

Auckland saw the most significant increase in new listings last month, with 52.0 per cent more new listings compared to December 2019, while Marlborough saw the biggest decrease with 23.5 per cent fewer properties coming onto the market. 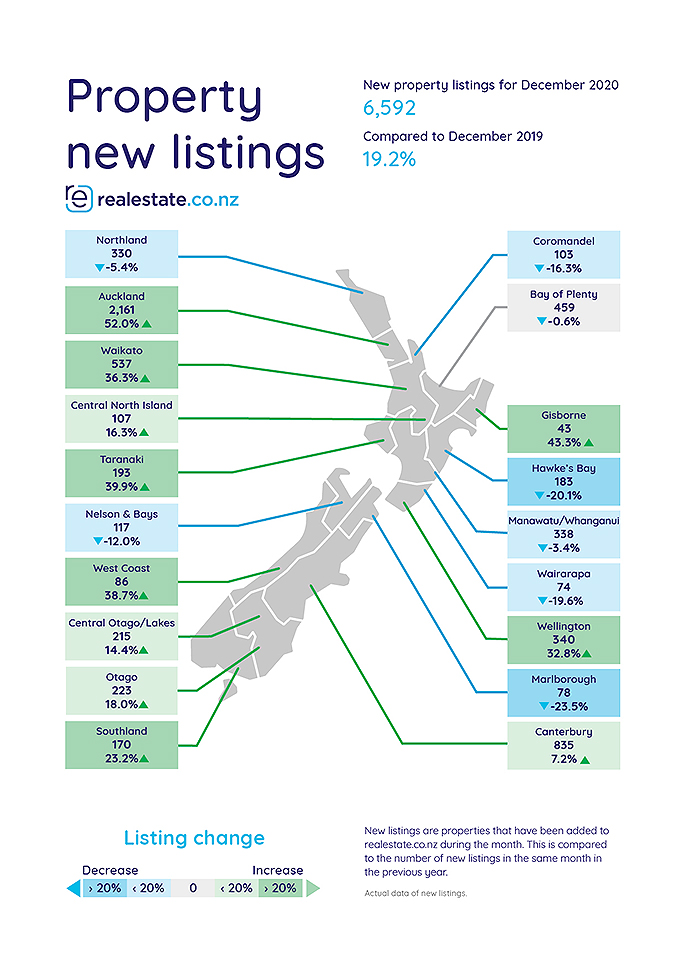 @groutby. I think I know now why the LVR was introduced. The govt wanted house owners to have enough equity in the property so that....When they cripple the housing market through legislation if need be, or when a global financial crisis hits and affects house prices negatively...The banks are not as exposed to take losses on what is their asset. I predict the govt could very well attempt to cripple the Real Estate sector soon to keep prices from moving so quickly. They may be just letting the banks get enough "paper" profit on the books to be able to withstand the future planned sustained attacks from Wellington. If it’s crazy you want. I’m right here. lol

How about this crazy thought..

.......remove the LVR, offer 95-100% loans to approved (strict criteria and genuine) first home buyers only...offer say the 20% deposit as being government guaranteed for maybe 5 years until the new owner is confident and financially settled giving the banks some confidence to loan that amount, probably this would encourage potential sellers to put their properies on the market and increase stocks..it ain’t perfect, but it will give new homeowners the capability to purchase their first home, ’cos the the ever increasing deposit (LVR) needed is the REAL AND TRUE problem surely?...