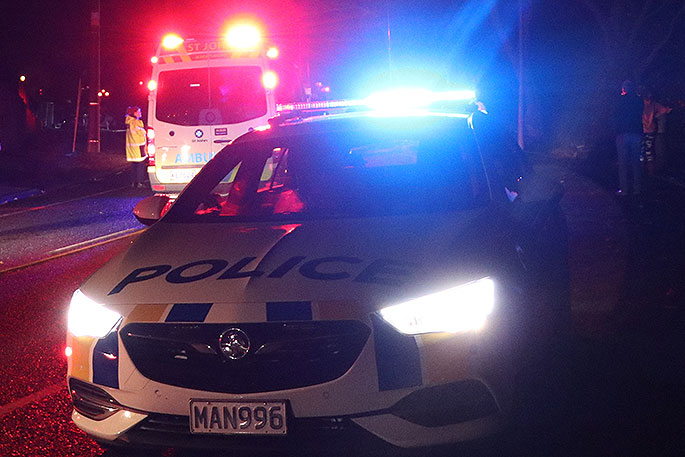 A man died en-route to hospital after being found with critical stab wounds on the ground outside of a Northland tavern.

Emergency services were called to a tavern on Opua Paihia Main Road, State Highway 11, in Opua, around 11pm.

Police located a male on the ground outside with critical stab wounds and despite efforts from St John staff, the man died enroute to hospital, says Detective Senior Sergeant Mark Dalzell.

“Police spoke with a number of people present at the scene and have arrested a 14-year-old male who is assisting Police with enquiries.”

Mark says charges are likely to be laid.

“Those who live and work in the area can expect a slight disruption today as police continue a scene examination outside of the tavern.

“The road is not closed but there will be a number of police staff in the area.”

Police are asking for any members of the public who were in the area last night and heard or saw anything which they think may be of relevance to the investigation to contact Kerikeri Police on 105.

“Police will not be in a position to release the name of the victim until all next-of-kin have been informed but we can confirm the deceased is a 22-year-old man.

“We will be ensuring his family is supported at what is an extremely difficult time.

“There is no further information available at this stage but we will provide an update to media later today.”

Anyone got any idea...

... WHY youngsters feel the need to carry a knife when going downtown? Is it cool to have a "blade"? Why aren’t schools addressing this? What about a classroom debate on it? The fact that you even HAVE a weapon means there is much more chance of you using it, than if you don’t (and therefore can’t...) Is bullying such a factor that kids feel the need to be armed? We need to have some straight questions, open debate, and straight answers. What are the influences bringing our youth to the conclusion that they need to "weaponize", resulting in the tragic death of another person. The person arrested must carry this crime for the rest of his life. It should never happen and needs to be stamped on.

i have mentioned before that it is not the guns the police should be concentrating on the knives that are out there, there is hundreds out there, the young males and teenagers if the police did a search on Saturday night down town Tauranga and the mount they would not have enough paddy wagons to arrest people, even school kids carry them in there bags,