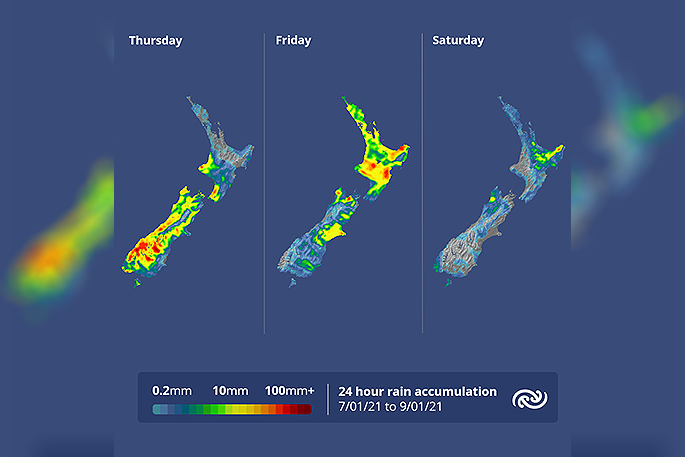 Rainfall accumulation for the next 24 hours. Image: MetService.

A broad area of low pressure affects New Zealand for the next couple of days, before a fresh southwest change.

MetService is forecasting active weather into the weekend, but relatively settled conditions look to prevail from Sunday into the new working week.

A low and its associated front sweep across Aotearoa today, delivering wet weather to the western and central parts of the country.

This rain gradually pushes to the eastern reaches, bringing an unsettled weather day for many.

Some in the western North Island may see a brief period of heavier falls, where a Heavy Rain Watch has been issued.

Meanwhile, thunderstorms develop over the South Island from this afternoon, with the highest risk over the central and south eastern inland areas, where severe thunderstorms are possible.

“Localised downpours of 25 to 40 mm in an hour are possible. Rainfall of this intensity could cause surface or flash flooding, especially for low-lying areas and where soils remain saturated from recent heavy rain,” says MetService meteorologist Mmathapelo Makgabutlane.

The environment favourable for thunderstorm development moves northwards on Friday, encompassing the upper South Island, as well as parts of central and eastern North Island.

Hawke’s Bay becomes the hotspot, with possible downpours in that area from afternoon.

Ahead of that, however, the North Island continues to be blanketed by a warm, moist airmass which keeps things sticky and warm. Uncomfortably warm nights continue into Friday morning, as overnight temperatures remain in the mid to high teens for most.

The second half of Friday brings a breath of fresh air, as a southwest change moves up the country from the south, ushering in a more refreshing airmass.

These south westerlies sprinkle the country with showers on Saturday, but by Sunday, most of the country sees a break in the wet weather.

The first working week of the New Year for many will be welcomed in by a bout of settled weather, promising dry commutes for much of next week.