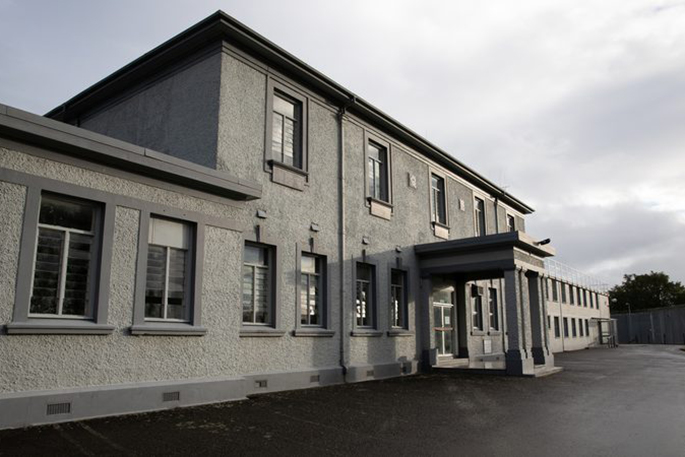 Officers fired sponge rounds at the men on the roof of the burning high-security building during the standoff at Waikeria Prison, police have confirmed to RNZ.

The remaining 16 inmates protesting over dilapidated conditions and Corrections' strategy for Māori, surrendered to the authorities on Sunday after six tense days.

Corrections has launched two reviews into what happened.

Whānau members of two of the men both received phone calls from their relatives who told them they were hit by the projectiles used by armed forces.

Jamie Waea says her partner, currently placed at Paremoremo Prison, told her he had been shot.

"He said that he was shot from the sponge rounds... It was quite distressing when I was speaking with him at the time, you could just hear all this banging and yelling."

Police told RNZ that sponge rounds were used during the standoff at Waikeria Prison, in order to protect Corrections and police staff.

The rounds are a non-lethal tactical option available to the Armed Offenders Squad (AOS) and the Special Tactics Group (STG), police say.

Waea says her partner had been wounded during the shooting.

"I didn't hear from him for a while, I didn't know that he had been hurt."

A second whānau member was in contact with her relative last Friday evening and was concerned when she heard 'two big bangs' in the background of the conversation.

She says her relative told her the men were being shot at before hanging up the phone.

The following day the whānau member said her relative told her he had been shot by rubber bullets and was injured.

"He let me know that he had been hit by sponge rounds, he couldn't breathe properly and he sounded really scared, he said he was sore," says the whānau member.

In the statement, police say the rounds are for use in high-risk situations where people are likely to harm themselves or others.

Sponge rounds are cylinder pellets with a plastic casing and a blunt, dense rubber tip, that are designed not to enter the skin.

According to the police, before utilising any tactical option, a risk assessment framework called TEN-R (Threat, Exposure, Necessity, Response) is applied.

Waea says following their surrender on Sunday, she was worried about her partner's well-being.

"It's getting to the point where I think it's going to affect his mental health, the emotions he was expressing while I was on the phone with him, it was quite upsetting," Waea says.

Corrections was asked whether water was used as a de-escalation tactic during the standoff.

A spokesperson says the department does not use or possess water cannons and "no directive was given to turn water hoses on the prisoners during the riot at Waikeria Prison.

"Any water that landed on prisoners involved in the riot can only be assumed to have been as a result of Fire and Emergency staff fighting the fires."

When asked further about the use of force, police say they are unable to provide any further information at this stage while the investigation is underway and a formal debrief process is taking place.

Corrections say its officers do not carry any form of firearms.

In a statement, the department says at the time of surrender, the 16 prisoners were provided with water, food, dry clothes, access to medical staff and had the ability to speak with kaumātua.

It says all 16 men have continued access to medical treatment.

Since the protest ended, there have been calls for an independent inquiry, a re-think of the Corrections' strategy that is meant to reduce Māori incarceration rates and criminal justice system reform.

Since the protest ended, there have been calls for an independent inquiry, a re-think of the Corrections’ strategy that is meant to reduce Māori incarceration rates and criminal justice system reform. Simple answer is quit committing serious crimes. Quit blaming your cultural background. Stand up and take responsibility the same as anyone else. It doesn’t matter in NZ if you’re European, Maori, Chinese, Japanese. We ALL have the same equal opportunity. We just have to take it, seize it.