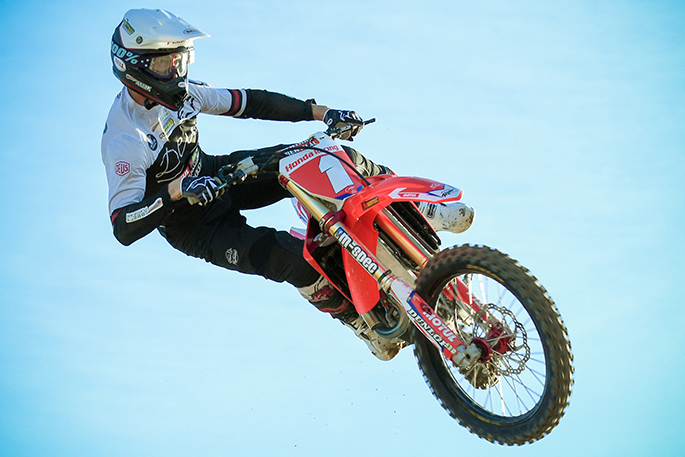 Mount Maunganui's Cody Cooper (Honda CRF450), again one of the favourites to win at Woodville. Photo by Andy McGechan, BikesportNZ.com

There will be so much more than meets the eye with this year's edition of the famous New Zealand Motocross Grand Prix at Woodville.

Now celebrating its 60th year, the event, set this year for the weekend of January 30-31, will have double the significance, also recognised this time around as the opening round of the New Zealand Motocross Championships.

It's the first time that the Honda-sponsored Woodville event, the largest stand-alone event on the New Zealand motorcycle racing calendar, has been afforded this honour.

New Zealand's elite motocross racers will again flood into the Tararua town for the New Zealand Motocross Grand Prix, with more than 700 riders, along with their support crews, families and supporters, expected to arrive for the two-day event in search of GP trophy honours and now also coming to hunt down valuable points towards national titles.

"We are excited to be running round one of the senior motocross championships at Woodville in January, an event that also incorporates the Women's Cup.

"The club is looking forward to hosting a truly world class motorcycle event and I am sure motorcycle fans will be hungry for Woodville, especially considering the year we have had with the COVID-19 pandemic."

He says the 2021 Honda New Zealand Motocross Grand Prix at Woodville will be live-streamed on the Sky Sport Next programme, which will also be a first for the event, allowing bike fans from across the country and around the world to watch the event live on television, laptops, cell phones or tablets.

The race programme will be bulging with the names of top-grade entrants from as young as four years old, to senior men and women in their 40s and 50s.

While plenty of international visitors have won the event in the past, it is worth noting that Kiwi riders are world class too and it is home-grown talent that has tended to dominate at Woodville over the years.

There have been 31 different overall winners at Woodville over the past 59 years and only 12 riders have won there more than once since the inaugural event in 1961.

Multi-time national MX1 champion Cody Cooper is a three-time former winner at Woodville – the top man there in 2007, 2014 and again in 2019 – and he'd like nothing better than to win it again.

In addition to his Woodville GP crown bid, the 37-year-old Cooper will be focussed on capturing the national MX1 title at the three rounds of the nationals that follow Woodville, in Rotorua on February 21, in Pukekohe on March 20 and, finally, at Taupo, on March 28.

A predominantly young man's sport, it's uncertain how many more years the Mount Maunganui man will have at the top level and the high-risk sport can be unforgiving and brutal at times, but Cooper is not ready to hang up his helmet just yet and winning the Honda New Zealand Motocross Grand Prix at Woodville is definitely the first on his "to do" list for 2021.