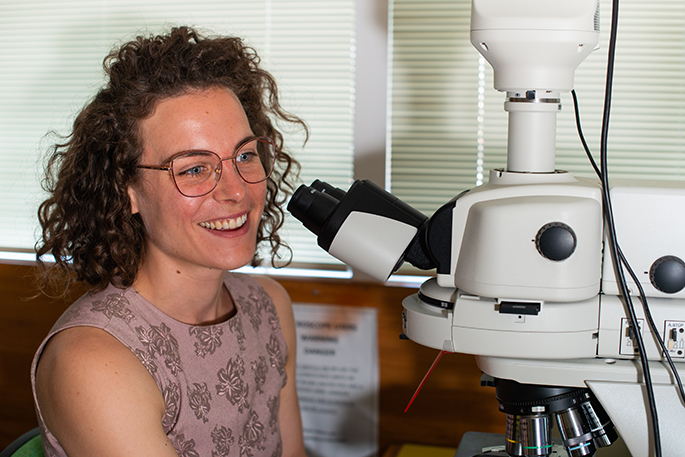 NIWA fisheries modeller Adele Dutilloy looking for sperm stored by a female shark was like looking for a needle in a haystack. Photo: NIWA

A NIWA researcher has found the first evidence that female deepsea sharks store sperm as a strategy to preserve the species and possibly avoid aggressive mating encounters.

Fisheries modeller Adele Dutilloy was keen to discover more about deep sea sharks in New Zealand waters which are considered at risk of the impact of fishing.

She figured that because so little is known about them, it was possible that some wrong assumptions were being made about the size and maturity of the females.

Using specimens of longnose velvet dogfish, leafscale gulper sharks and smooth deep sea skate collected by NIWA research vessel Tangaroa on the Chatham Rise and in the sub-Antarctic, Adele compared measurements of the reproductive organs with other assessment methods which are more subjective.

"I also cut up parts of the oviducal gland which produces egg casings and jelly to protect the egg and the foetus. In other species this gland has also been known to store sperm."

Thin sections of the gland were put on a microscope slide and stained. If sperm was present it would show up as dark blue, while the rest of the cell structure would be more purple.

"I had lots of help trying to figure out what was sperm and what was other bits of cells. But as soon I was able to find one, it was actually quite easy to identify.

"I have to say though looking for sperm inside a cell is like looking for a needle in a haystack. It was incredibly exciting when I actually found it." 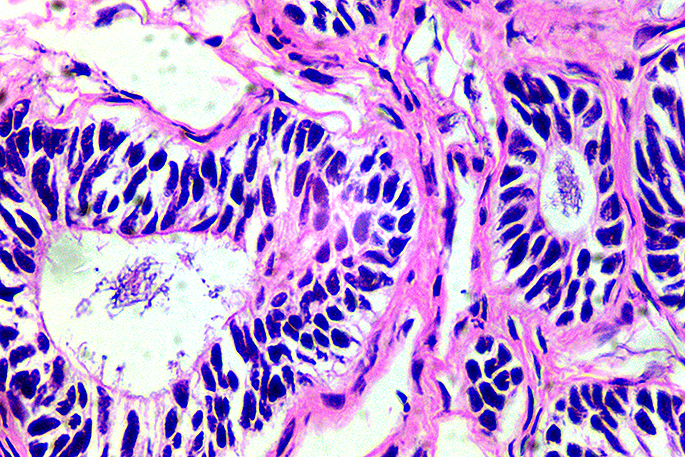 Distinguishing sperm in a female shark means being able to differentiate between different shades of blue. Photo: NIWA.

While sperm storage is a relatively common strategy in some insects, bats, turtles and fish, this is the first time it has been documented in these species of deepsea sharks - Adele found sperm storage in three of the nine species she looked at it.

"It makes quite a lot of sense if our theories about the deep sea are true - that species are found in low numbers and they’re quite spread out, so they make the most of mating opportunities."

If female sharks are not able to produce viable offspring when they mate, they may store sperm to use when they start ovulating - turtles go one step further and can decide which sperm to use to fertilise their eggs.

And in some species of anglerfish the male fuses itself to the female, essentially acting as a sperm bank to increase the chances of reproductive success.

Adele says there may also be other explanations for female deepsea sharks storing sperm.

"It might also be a strategy to reduce the need for more frequent mating events. Shark mating can be very aggressive resulting in bite wounds to the females."

Sharks can also congregate in groups for mating where multiple males will mate with a single female.

"It’s thought to be advantageous because it increases each male’s chances of passing on their genes to the next generation."

Adele says it is not known how long sperm can be stored for but there are estimates of between 13 months and two years.

She is now hoping to investigate whether visual assessments of shark sexual maturity have been historically inaccurate and whether that matters.

"If our estimates of maturity are quite different to the reality, we think it might end up having quite a big impact on how we perceive that species and their resilience to fishing. If that’s the case, we need to find a better way of identifying a mature fish. "

She says when a fish is pregnant or bearing offspring may be a better gauge of the size of the reproductive adult population.

"This might give us a better idea of how resilient or how vulnerable a species is."