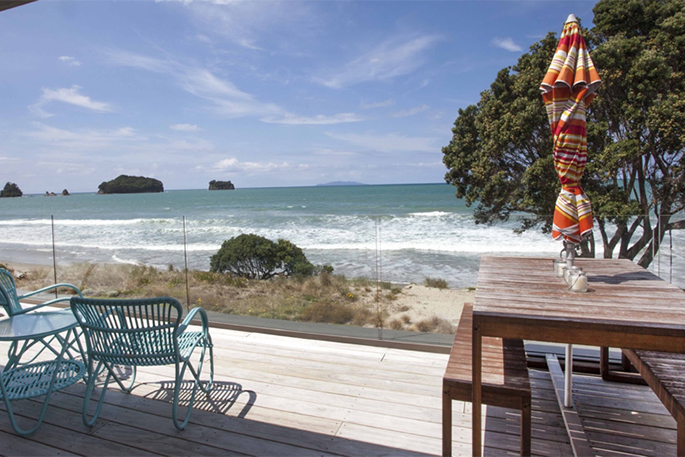 The mayor of Thames Coromandel says the parents of under-age drinkers should help to pay for the damage caused by last night's riot in Whangamatā.

Twenty-two people were arrested in the Coromandel holiday hotspot for offences including disorder, assaults and unlawfully being on property.

Police say a number of people were injured from bottles thrown into the crowd which had swelled to about 1000 people.

Mayor Sandra Goudie says a safe zone had to be set up to care for the wounded and seriously intoxicated.

"They just ran riot. A lot of them were drunk and a safe zone was set up to care of the wounded, the sick and the seriously inebriated ... like they were ill enough that it threatened their lives."

Some were as young as 14, says Sandra.

She says not only did they place themselves at risk, but thousands of dollars worth of losses had been incurred by a local iconic cafe, Blackies, through the theft of goods and vandalism.

"Not only did they do horrendous damage when they were massed up on top of the building, they were throwing bottles into the crowd.

"The police had to go in and rescue the people in the crowd being injured, and take them to the safe zone while defending themselves, while at the same getting these larrikins off the roof of the building."

Eastern Waikato Area Commander Inspector Dean Anderson says a number of people were injured from alcohol bottles being thrown into the crowds,

He says it was disappointing when New Year's Eve was celebrated well by the majority of people in the area, with positive interactions with police.

"Unfortunately, as has been experienced in previous years, there were hot spots of disorder requiring police resource and attention.

Bay of Plenty police also helped with the response.

Sandra says the crowd's behaviour was totally unacceptable, and left her wondering who might foot the bill.

"Hopefully Blackies has some insurance and if not, then the parents of the under-age ones should be paying at the very least."

Those charged and who now faced fines should also be required to pay for the damage.

...what had happened my first reaction was: "Round up the kids involved and ensure they don’t leave the town until it has been cleaned up and damage repaired. Then make the parents pay for the criminal damage." If it is "too hard" to decide what kids did what, then the parents of all kids who were arrested pay an equal amount into a "reparations pool" and it is given to businesses to help cover the insurance shortfalls. Parents and kids HAVE to take responsibility and learn that this is not a celebration; it is unnecessary mayhem and won’t be tolerated. As for older people inciting them to riot, they should be locked up until they cool down (minimal 21 days) and a criminal record. The Mayor here deserves support. I hope she gets it.

The parents are very quiet, haven’t heard a word.

No, the parents didn’t do the damage, make the kids pay all of the costs. Parents can’t be expected to know what their kids are doing 24/7. We all know that the young ones these days do what they want as Parents no longer have control (lack of discipline) of them from a young age and yes "some" parents are useless and shouldn’t breed but not all. Make the offenders pay - this is how people learn (from their mistakes). Its called life.

Have to totally agree with Slim Shady

AND the same needs to happen at Waikeria Prison - rubber bullets / gas and the rest - the Justice system in NEW ZEALAND has become a JOKE !! So called prisoners have MORE RIGHTS then the taxpayers on the streets that PAY for the prisons!!!

you young people thinking? Tomorrow, the world as you know it could be gone because of your recklessness. What were you thinking - you could be sick with Covid 19 tomorrow. Oh that’s right, young people don’t think and have no clue how to. Devices, devices and facebook. Your downfall - just don’t take the rest of us with your selfishness!

That would be the understatement

Plus the reprobates should be put in prison garb and made to clean up the mess and the damage on the Cafe plus pay the Cafe losses. List their names in the media so everyone will know who they are and their parents.

I bet the wet bus tickets will be out.Shop keepers have enough hardship with Covid

You have to wonder what control the parents have to produce useless morons like this lot but, someone has to pay for the damage so lets hope that justice prevails, but I doubt it!

Great idea from Mayor but unfortunately our soft laws let thugs get away with a wet bus ticket. We keep diluting parental responsibility. They don’t need to make school lunches anymore.

The Youth Court won’t do anything of substance. Good on the Mayor for speaking out.

those charged will be told naughty children dont do it again. once again the victims will have to pay to fix the damage

“Safe zones”, “disappointing”, “rescue”, “larrikins” - listen to your terminology. No wonder they think they can wreck the place. Criminals that should be hosed down with water cannons and rubber bullets (personally, live ammunition would be fine). Their parents are too busy getting smashed elsewhere and abdicate responsibility. The parents should serve the same sentence alongside their brats.