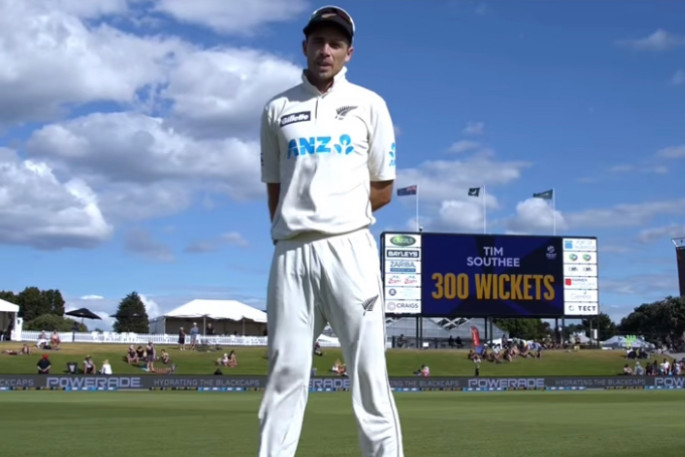 He has become the third New Zealander to reach 300 Test wickets when he dismissed Haris Sohail in the third session.

The 32-year-old right armer led the way for his side by picking up wickets either side of tea after Kane Williamson's second session declaration left Pakistan requiring 373 runs for victory from 136 overs.

Black Caps fast bowler Kyle Jamieson has been fined 25 per cent of his match fee for breaching Level 1 of the ICC code of conduct.

The breach occurred during a fielding incident on the third day of the first test against Pakistan in Mount Maunganui.

Jamieson was found to have breached Article 2.9 of the ICC code of conduct for players and player support personnel, which relates to throwing a ball at or near a player in an inappropriate and/or dangerous manner during an international match.

In addition to this, one demerit point has been added to the disciplinary record of Jamieson, for whom it was the first offence in a 24-month period.

The incident occurred in the 75th over of Pakistan’s first innings on Monday, when Jamieson, after fielding the ball in his follow through, threw it in the direction of Faheem Ashraf at high speed when the batsman was away from the stumps but within the crease and not intending to take a run.

Jamieson admitted the offence and accepted the sanction proposed by match referee Jeff Crowe and ratified by the ICC Cricket Operations department as per the Covid-19 interim playing regulations.

Level 1 breaches carry a minimum penalty of an official reprimand, a maximum penalty of 50 per cent of a player’s match fee, and one or two demerit points.

Jamieson made his test debut for the Black Caps against India in February.

The sun has risen over day five today of the Black Caps v Pakistan cricket match at Bay Oval in Mount Maunganui.

Day Five is free entry to all to the grounds to watch the final day of exciting cricket.