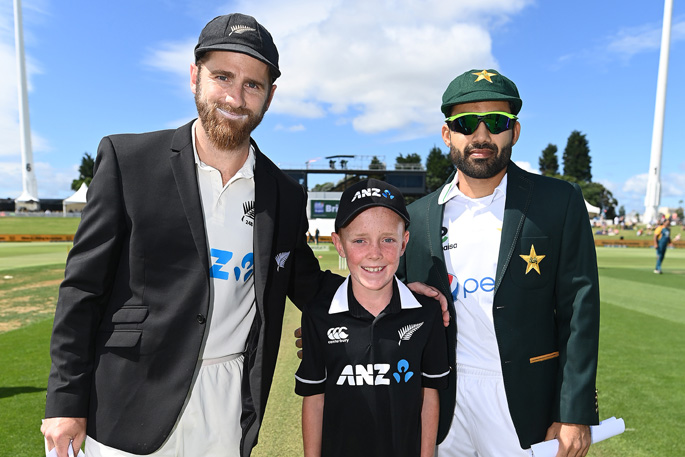 Mount Maunganui cricketer nine-year-old Ethan Cotter says he was “a little bit nervous but very excited” to meet his heroes on Boxing Day at the BLACKCAPS vs Pakistan match at Bay Oval.

The Omanu Primary student participated in the pre-match coin toss with captains Kane Williamson and Mohamed Rizwan as a part of the ANZ Coin Toss competition.

Ethan, who plays representative cricket for Western Bay of Plenty, won the opportunity to be a Coin Toss kid and experience standing side by side with the captains.

Ethan says his favourite part was all the signatures he collected on his bat, and the ball he received.

“We’re going to keep the ball in a box so I can have it forever,” says Ethan.

The ball was signed by Kane Williamson and is a lasting memory of his first ever test match at Bay Oval.

Ethan now has a summer filled with cricket to look forward too, including a tournament coming up in the new year.

Head of Sponsorship at ANZ, Sue McGregor says Ethan was one of 22 promising young cricketers chosen to take part in the pre-match custom this cricket season.

“After such a tough year it has been even more apparent the important role that sport and our sporting heroes play to inspire our future generations," says Sue.

“We are so pleased to be able to continue creating these once in a lifetime opportunities for our future BLACKCAPS and WHITE FERNS. Getting to meet their heroes is something we hope will stay with them for years to come.”

The Coin Toss experience is part of ANZ’s long-standing support of Kiwi cricketers.

Since 2009 ANZ has given over $1 million to local cricket players, teams & clubs.

In addition, ANZ has donated $1 million in grants to grassroots cricket and netball clubs to help them get back up and running after COVID-19.

Applications to win the chance to take part in the ANZ Coin Toss experience are still open. Apply for the Coin Toss Experience or for an ANZ Cricket Grant at www.anzcricketworld.co.nz.