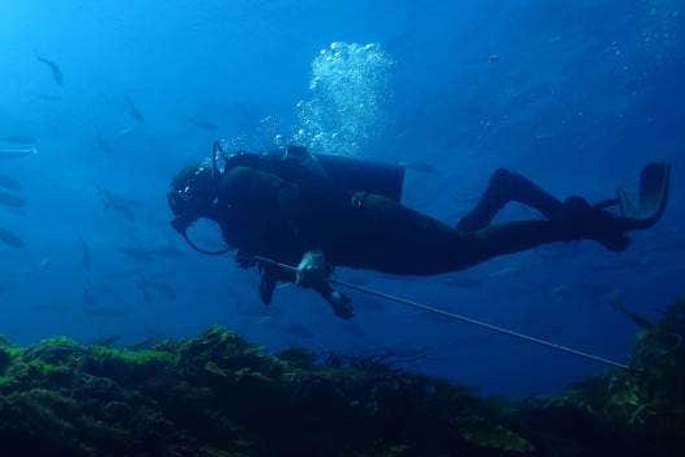 Phil Ross dives along the wreck of the Rena which has been reclaimed by nature. Photo: Phil Ross.

The desolate wreck of the MV Rena, which ran aground on the Astrolabe Reef in October 2011, has been reclaimed by nature and become a thriving kelp forest.

Tauranga diver and ecologist Phil Ross has been monitoring the wreckage of the Rena since 2012 and says the wildlife reclamation is a compliment to the salvager's good work.

His latest dive in December 2020 shows the stark contrast to his first dive in 2012 where the reef looked like a “scrapheap” littered with tyres, broken containers and twisted steel.

“It looked like someone had taken a ship, tipped it upside down, shaken everything out of it and then jumped up and down on it,” Phil says.

“Looking at it then I couldn’t imagine how it would recover but through the process of salvaging that debris field got taken away and allowed the reef to recover.”

When the Rena collided with Astrolabe Reef it leaked oil, along with containers into the sea. It is classed as New Zealand’s worst marine ecological disaster.

Battered by tides, the stricken ship eventually broke in half and started to sink below the surface.

The worlds’ second-most expensive salvage operation, $700 million, was launched to remove the wreckage, along with scattered debris near the reef.

In his recent video, Phil comes close to species of fish living around and inside the wreckage along with anemones, algae and kelp covering the surfaces of the former ship.

He says if you didn’t know the kelp was sitting atop of steel, you could almost mistake it for any other reef.

“Nature has really taken control of the wreck,” he says.

“Almost all the surface is covered in different types of algae.”

Phil is part of a team that is monitoring the Rena for the next 20 years to check it causes no further damage to the reef and any issues are identified early.

They are monitoring for any pieces of steel that might become dislodged and float in the tide to damage the reef, as well as the status of 5 to 10 tonnes of granulated copper trapped underneath the wreck’s hull.

“Copper is quite disastrous in a marine environment,” Phil says.

“At the moment it is all in one pile and trapped underneath the ship where it will hopefully stay. We monitor it to make sure we identify any issues.”

He says the fact the Rena is doing well is good news for the Bay of Plenty.

“The Rena was a really emotional issue for the Bay of Plenty.

“People went to the beach and demanded to be part of the cleanup effort. It’s good to see there are no more plastic beads coming out. It’s [the Rena] is in pretty good shape.

“It was New Zealand’s worst ecological disaster, and we’ve come out not too bad considering.”