Watch out for jellyfish blooms 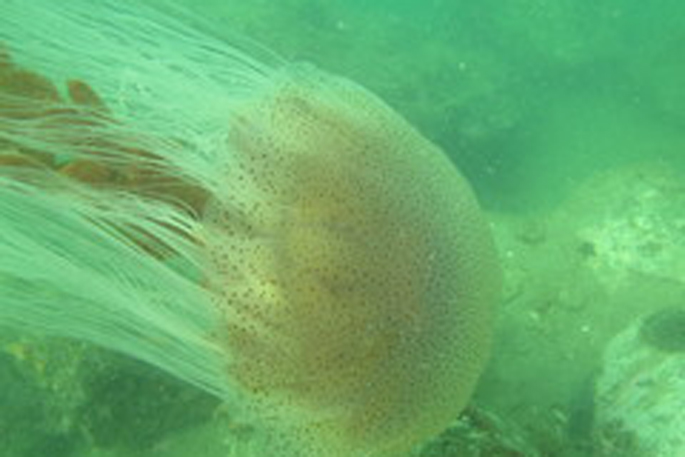 Jellyfish blooms are likely to be a common sight this summer with rising ocean temperatures one of the main causes of substantial population growths.

NIWA forecasters have identified a marine heatwave in the waters to the north of the North Island and are keeping a close eye on sea surface temperatures around the country which have all been above average since October.

"Jellyfish numbers increase as a result, then prevailing winds and currents can gather them up into dense groups and strand them on beaches," she says.

Jellies are important in marine food webs. Their role can be as a predator, prey or as decomposing scraps of food for suspension feeders in the water, or for bacteria on the seafloor.

Jellyfish blooms can impact industries involved in marine activities such as salmon farms or invade beaches and sting swimmers. Scientists are discovering that human impacts such as overfishing, pollution and warming oceans are exacerbating the problem of jellyfish blooms. Unlike most ocean dwellers, jellyfish are set to actually benefit from these impacts.

While there are about 223 species of Scyphozoa jellyfish worldwide, just 22 are found in New Zealand waters. However, the term "jellyfish" is used to describe a diverse range of jelly-like creatures including true jellyfish, hydromedusae, siphonophores, box and stalked jellyfish, comb jellies (Ctenophora) and salps (Chordata).

Diana describes them as one of the most evolutionary primitive group of invertebrates.

"They have no brain, no bones and no heart but they reproduce, eat, and defend themselves or catch prey with astounding stinging cells called nematocysts, which work a bit like a harpoon that contains venom."

Those stinging cells are what sometimes gives jellyfish a bad reputation but not all are stingers- and comb jellies and salps don’t sting at all.

"They are all a natural part of the ecology of all oceans. They are resilient and good at what they do."

Her advice in the event of being stung by a jellyfish is to flush the area with seawater to remove the stinging cells, carefully pluck off any tentacles that might be stuck on, then apply heat to relieve the pain and deactivate the venom.

Using urine to relieve a sting is a popular misconception - there is no way of telling its pH and chemical make-up so it could actually make the pain worse.

Most stings in New Zealand waters are not serious but jellyfish should be avoided when possible.

Despite their harmful potential, Diana says jellyfish are beautifully mesmerising. One of her favourites is Periphylla periphylla, the Santa’s hat or helmet jelly.

It is a deep-sea species found in all oceans, including in the Ross Sea, Antarctica. It has a bioluminescent twinkle, a dainty sparkling effect thought to provide camouflage by creating confusion about its true size and shape, and its red stomach in the dark deep waters looks black and becomes invisible. The opaque red also helps to hide glow emitted from any recently eaten bioluminescent prey.