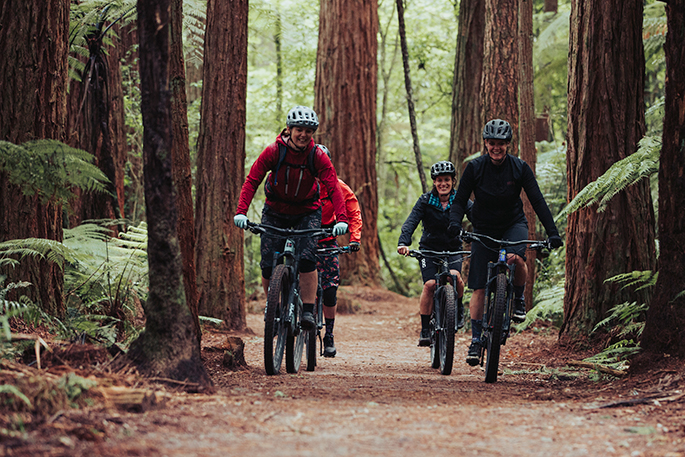 With all of the uncertainties 2020 has brought with it Sport Bay of Plenty wants to ensure the year ends with a positive message that continues into the New Year.

The organisation, which aims to help keep more people active through sport, recreation and play opportunities throughout the Bay of Plenty region, has launched a summer campaign called Get Active.

The campaign, which started this month, aims to get people active by exploring the Bay of Plenty’s outdoor recreation spaces over summer.

Sport Bay of Plenty’s communications team leader Danene Jones says the organisation wanted to help keep people of all ages and fitness levels active in the Bay of Plenty through all-weather tips, sharing some of our favourite walking tracks, raising awareness of what services were available through Sport Bay of Plenty and highlighting activities such as scavenger hunts that the whole family can enjoy.

Bay of Plenty residents are also sharing their own experiences with keeping active in the region and also encourages others to do the same.

“As part of the campaign we are sharing people’s stories about how they keep active in the Bay of Plenty and why it’s important for them,” says Jones.

“For all of them, the benefits of keeping active goes beyond the physical, with social connections, supporting mental health and creating memories among the many others highlighted,” she said.

For Tauranga’s Emma Moore-Henderson keeping active with her family – including husband James Henderson and their three children Luca, Maric and Saskia - is a way to enjoy some quality time together.

“We find it really important for us not only for a healthy lifestyle but also for enjoyment and family time. You can get a bit stuck in work and jobs around the house and doing other things and we find that If we come out and do something we not only get to connect together but we get to explore parts of New Zealand and just have some fun,” she says.

Moore-Henderson says as long as the family had clothes, food and a spare towel, there was an adventure able to be had.

“At the beginning of the year we usually pick 10 things each that the kids want to do for a resolution and we try and work through those.”

Rotorua’s Philly Angus’ activity of choice was mountain biking with her friends in the Whakarewarewa Forest.

“Mountain biking for me is all about the connection … we’ve got a pretty awesome girl gang that connects on a regular basis.

“I just love being able to spend time with my friends out in the forest … finding out what’s happening on the day-to-day and just making sure that we’re doing okay,” she says.

“I love that social side of riding so it’s great for my physical wellbeing, but phenomenal for my mental well-being and making sure I’m staying connected with the people that I love.”

Angus got into the sport for social reasons nine years ago and now tried to get into the redwoods at least three times a week.

“Whakarewarewa Forest is my favourite place to ride, which is lucky because it’s right on my back doorstep,” Angus says.

“After you’ve been in the forest you always feel energised and it is a really special place to be,” she says.

The idea for the campaign came about due to the uncertainties that 2020 has brought with it.

“Off the back of a year of social distancing and isolation, the campaign will embrace a new year and emphasise the social connections and ‘togetherness’ to be found through physical activities,” Jones says.

Between ages 18-24 and throughout adult years, weekly participation plateaus, before declining from age 65-plus.

The survey also revealed Bay of Plenty adults spent an average of 5.5 hours a week in organised and informal activities compared to 11.7 hours a week for young people aged 5-17.

Sport Bay of Plenty wants to remind people of the importance of being active for a person’s overall wellbeing and that being active can be as simple as swinging on a swing, enjoying a swim or taking a leisurely walk in your neighbourhood.

Jones said being active did not necessarily mean being competitive in sports and encouraged people to get out and about enjoying the Bay of Plenty’s outdoors this summer.

As an incentive, Sport Bay of Plenty is offering people the chance to win the ultimate adventure prize pack that includes mountain bike hire, a stand up paddle boarding family pass, a Velocity Valley Adventure pass as well as $100 vouchers for Torpedo7 and Capers Café and Store.

For more information go to sportbop.co.nz/get-active/get-active-bop-competition/