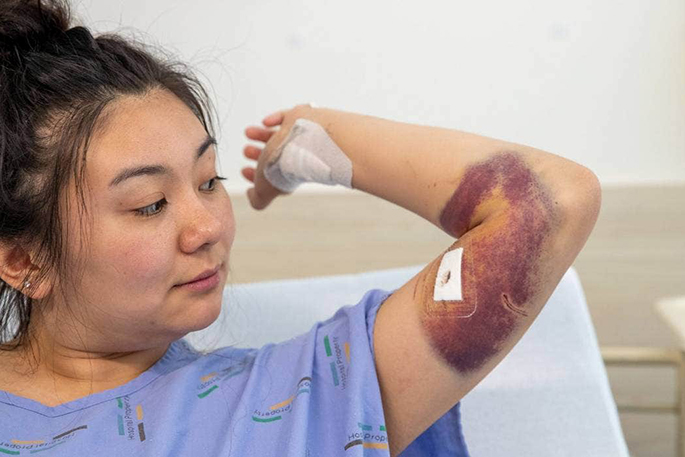 Alyssa Joe, 18, was the most severely injured when the car she and four friends were travelling in plunged 25m off a cliff near Thames. Photo: Tom Lee/Stuff.

Sunbathing, swimming and plummeting down a 25m cliff – it’s a swimming hole jaunt that Alyssa Joe and four friends from high school will never forget.

“I’m just happy to be alive and still moving around,” the 18-year-old tells Stuff from her hospital bed after the near-tragedy on the Kauaeranga Valley Rd near Thames.

She and her friends - Fergus McMillan, Bella Claire, Troy Cutriss and boyfriend James Hazleman - drove to one of their favourite swimming holes on the Coromandel and arrived about 2pm.

They spent the afternoon in typical fashion – swimming, sunbathing and mucking around before packing up and heading home.

It was a return journey they’d done hundreds of times before.

But this time was different. 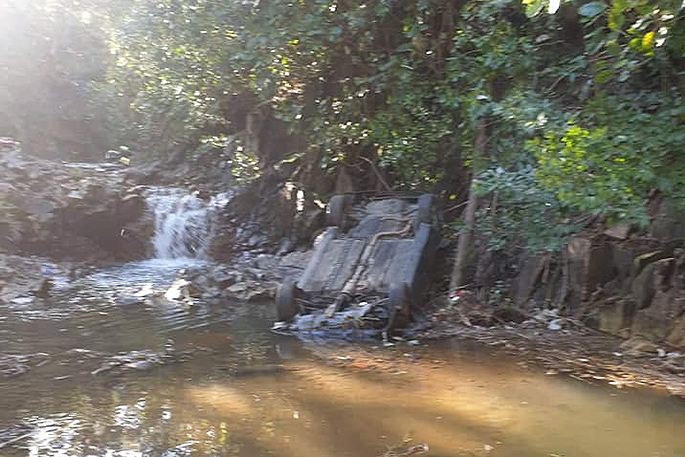 The vehicle plunged down a 25m bank into the river below. Photo: Thames Volunteer Fire Brigade Facebook.

On their way back down the gravel road, driving at what Joe described as “normal speed”, they hit a sharp corner a bit hard.

The back wheels slipped out and the car crashed through a barrier.

As they plummeted down the 25m sheer bank, the car flipped four times and landed on its roof in the river.

“We were all just screaming,” Joe recalls.

“The driver was pushed into the water, so half the car was in the water.”

Hanging from their seatbelts, Joe says the car started filling up with smoke.

A smashed window on the front passenger side was the only way to escape and everyone managed to clamber out.

The adrenalin had kicked in at that stage and everyone was just happy to be talking and safe, she says.

“We sat around watching the water, holding each other for a bit.”

About 20 minutes later they spotted Joe’s waterproof phone and called for help.

Locals also made it down to them and ripped shirts off to help cover Joe and her friends and put pressure on their wounds.

Joe had the most serious injuries of the group, including a fractured lower back and ankle, but she says her back was healing well.

She was flown out of the area by the rescue helicopter and travelled via ambulance to Thames Hospital then Waikato Hospital.

Being winched out was probably the most frightening thing, Joe says.

“It was terrible I hated it.

“It was so high ... I think I got most of my fear out of that then anything else.”

She had to have surgery on her ankle to put plates in and says the group all suffered “lots of cuts and bruises and bad seatbelt burns”.

However, Joe is upbeat, focussing on how lucky everyone is to be alive.

Her Christmas plans remain unchanged. She hopes to be discharged from hospital before Christmas Day, but her New Year's Eve plans would be a lot quieter, she reckons.

Out of the remaining four passengers, three were taken to Thames Hospital and discharged by Monday and one suffered no injuries.